The veteran scribe’s past work includes titles like Batman, Moonknight, The Punisher and more. He also helped create the iconic Bat villain Bane.

The Dark Knight’s arch enemy famously broke Batman’s back in one of DC Comics’ most haunting moments.

Dixon doubles as a prolific fiction writer. His “Levon Cade” series features story elements you probably won’t find from most modern writers. His vigilante hero is back with “Levon’s War: Levon Cade Book 5

This time, Cade must keep a personal promise, bringing him into the heart of Iraq where ISIS soldiers await.

Hollywood in Toto reached out to the unabashedly conservative Dixon to learn more about his latest book and why he’s no longer welcome at the big comic book companies.

HollywoodInToto.com: Is it a challenging to concoct new adventures for Levon Cade at this point, or does it get easier the more you write and learn about the character?

Chuck Dixon: The characters themselves are easier to write as I know them. They’re really alive in my mind. The challenge is to put them in new action/suspense scenarios that aren’t repetitive or contrived. I feel confident I’ve managed that. Each book has had a different focus; a revenge story, a heist story, a chase story, a crime story and now a war story.

HiT: Very few characters on TV or film engage ISIS … was that one reason you included the group as the story’s villain? What special challenges did ISIS present to you as a writer?

Dixon: I try to keep the Levon Cade series grounded in the real world. When it came time to send him back to the battlefield the only natural choice of enemies is ISIS. I’m not revealing any big secret when I say that this series is very much rooted in my love for 1970s men’s action paperbacks.

With Levon Cade I’m trying to present a more real-world equivalent of the Destroyer or the Executioner. Part of the appeal of those books was the satisfaction of reading about really bad guys meeting a guy even badder than them.

We all love a story where a bully is put down. And ISIS is the biggest group of bullies on the planet. Who doesn’t want to read about them getting a taste of their own medicine? 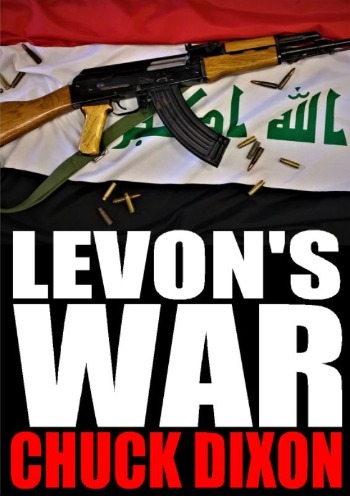 The challenge was doing the homework, the research, so that the story seems believable and the portrayal of the people and places honest. That required a lot of book reading and some Google searches that probably have me on a watch list somewhere now.

The other challenge is not to caricature these guys. That’s a tall order since they act like cartoon villains. I don’t try to humanize them by having them pet puppies or any cheap tropes like that. But I present their evil in the context of their lives.

HiT: You can’t make a literary series unless the hero strikes a chord with readers. What’s been the most intriguing reactions to Levon Cade so far?

Dixon: The reaction I think I like the most is from Iraq and Afghanistan vets. They like the stories and tell me that I got this guy right. I’ve had a few friends from my comic book days tell me that Levon is perhaps a bit too coldblooded.

I’m actually encouraged by that.I want Levon to challenge the reader’s ideas of what a hero is. Levon is not a guy you’d necessarily want to go on a long car ride with. Only his daughter Merry sees his true face. The rest of the time the armor is up. And he does have an extremely dark past that I only ever hint at. As a character in the new novel tells him,” “You are a kind man. But maybe not a good man.”

HiT: What’s the secret sauce for a popular vigilante character? Do you think readers today hunger for that style of hero these days?

They always have and always will. Everyone dreams of being the kind of person who could break all the rules and make their own. And I think the key to a good story like this is what I call the “you don’t know who you’re messing with” element. The bad guys are clueless until it’s way too late.

HiT: You’ve been in the comic book trenches for some time … why do you think superhero films reign supreme at the cineplex? What does that say about modern audiences?

Dixon: On the Marvel side in particular, they are mining over 50 years of dense continuity and staying true to the core appeal of the characters. Audiences all over the world are now seeing what every hardcore comic geek has known since childhood. These stories are compelling and the characters appealing.

HiT: Are you fans of any writers who don’t get the credit/attention they deserve? Can you share a few names here and a book or two that represents their best work?

Dixon: Marc Behm is a big influence on my writing. This where almost everyone says “Who?” He’s a fearless novelist who works in French for the most part. He ranges across the genres from vampires to Nazis to allegory. And he usually touches on each genre only once.

The rage is palpable, and editors and publishers are very open with their discrimination [against conservatives].

His only private eye novel, “The Eye of the Beholder

,” is a classic of the form and also a deconstruction of the PI mystery novel. He’s terse and too the point but never “on the nose.” He can do more with less words than any writer I’ve ever read.

HiT: You’re open about your political leanings … what have been the repercussions of that, if any? If there have been issues, has it gotten better or worse of late?

Dixon: I’ve burnt every bridge by now so the repercussions amount only to sad, breathless rants on Facebook or impotent attempts to boycott me. I have taken action against FB posters who made spurious claims of having “proof” that I’m some kind of racist.

Though things have ramped up, if I had managed to hold on at DC and Marvel until now, that would have ended with Trump’s victory. The rage is palpable, and editors and publishers are very open with their discrimination.

The departure of Axel Alonso from Marvel has not ended the blacklisting for me. So I guess he wasn’t the only one who can’t see past their ideology.