Asay, a conservative editorial cartoonist, recalls reading the magazine while an impressionable teen.

“The satire is what caught my eye. They could get away with just about anything and make it entertaining,” Asay says.

The budding cartoonist would take the magazine’s ink-stained baton and run with it.

For years, Asay skewered the Left with his cartoon panels, showcased primarily at the Colorado Springs Gazette. Most of his peers targeted President Ronald Reagan, members of the Bush clan or various GOP types. Not Asay. He hit the other side of the aisle.

Now, his best cartoons can be found at the Pikes Peak Library District in Colorado Springs, Colo.

He originally planned to donate his work – somewhere between 8,000 to 10,000 panels – to Ohio State University’s archives. That’s where many editorial cartoonists send their material.

Instead, Asay picked up the phone and contacted Colo.-based libraries. He hoped to find a more fitting home for his hard work.

“A lot of my cartoons are local. In Ohio, nobody would know who I was or what the issues are about,” he explains.

He inspired plenty of hate mail during his career. That was before the era of social media meltdowns and “safe spaces.”

He saw it coming. And he never blinked when it arrived. His personal web site shares his artistic credo:

I have been inflicting my religious, right-wing, wacko views on people for over 30 years. I think it’s fun. We live in a free country where everyone is entitled to my opinion. 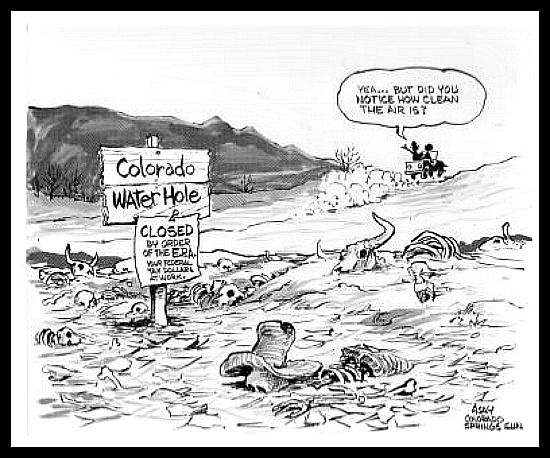 Sometimes, that opinion helped readers change their views. He heard anecdotally over the years that his work influenced some minds.

Often, it had the opposite effect.

“Mostly you just make people mad and they dig in their heels,” he says. The cartoonist took pride in it.

“I love to talk with people who don’t like me at all … we get in a conversations about world views,” he says, chats which often end up civil in tone. He considers Ted Rall, a notoriously progressive cartoonist, a chum. And the feeling is mutual.

RELATED: Hollywood Must Defend Free Speech … Or Else

Asay retired from the Colorado Gazette in 2007, but segued to the national platform when he joined the Creators Syndicate lineup.

He left that gig in 2013. Now, he’s fully retired with no plans to reverse course.

“Now, I just tell my wife what my views are,” he cracks. The current political climate does intrigue him, though.

“It’s a target-rich environment. I’ve love to draw Trump and Hillary,” he says.

He recognizes he was a proud part of a dying breed given the current state of journalism.

He says the surviving cartoonists put the emphasis on the words, the humor, as opposed to the artistry. He can’t hide his disappointment.

“The barb is the main point … in the olden days the drawing carried the weight,” he says. For him, that meant using a brush, not a pen, to create his panels.

“You have more snap and livelihood in your lines,” he explains. 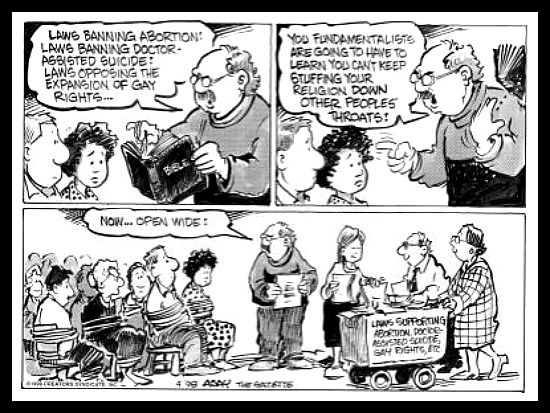 Asay’s panels were decidedly conservative in a field where most artists lean left. He has a theory why that is.

“I think liberals tend to be attracted to journalism and newspaperdom. They want to make a difference,” he says. “Liberal cartoonists are willing to make the [financial] sacrifice to do that … they get good feedback from their colleagues.”

“Newsrooms,” he adds, “are filled with like-minded, progressive thinking people.”

So did he ever experience unfair treatment for being a right-of-center soul?

“I find when I am discriminated against in one way or another it’s a badge of honor,” he says. That’s as far as he takes it.

“Victimization is the worst disease a person can get. It debilitates you,” he says.

FAST FACT: Chuck Asay considers 1 Thessalonians 5:14 his unofficial job description: “We need to warn the idle, encourage the timid, help the weak and be patient with everyone.”

The next generation of editorial cartoonists face a daunting task. Survive at a time when even beloved reporters find pink slips in their weekly envelopes?

For those motivated souls, Asay cautions patience. It also helps to have a thick skin.

“Accept rejection,” he says. “That’s the most important thing. If you’re meant to be a cartoonist, you’ll inflict your views on people whether you get paid for it or not.”

Virtually anyone can do what he did on their own web site. Supporting oneself with that artwork? That’s another matter.