The debut eschewed a traditional monologue or house band. Instead, Handler described the show itself and had Chris Martin of Coldplay serenade her in slightly insulting fashion.

Neither were hilarious, for those keeping score at home. 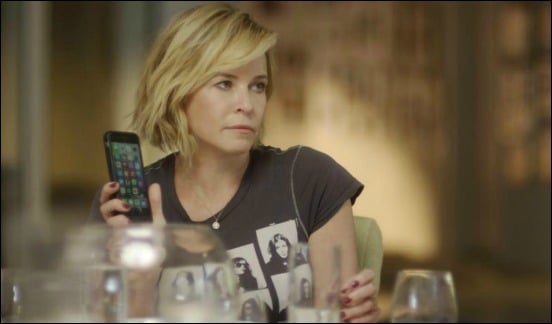 Handler did touch briefly on the 2016 presidential campaign. For a show aching to break the late night mold the bit was as stale as a pie to the face.

“From what I can gather, I’m almost positive that this is an election year,” she began.

“So you might not know it but you need me. Without my insight how will the American electorate ever be able to decide between a highly qualified woman with impeccable credentials and a bankrupt, misogynistic, racist, orange a**hole.”

Not much different than what most late night comics serve up. She had to quickly qualify her remarks, though.

“I’m not afraid to express my opinions no matter how ill-informed they may be,” she explained.

Later, a bit about Netflix’s algorithm recommending titles based on past choices took a swing at … President George W. Bush.

Ripped right of the headlines … from 2007

And there’s the rub from Handler’s premiere episode. Look past the fact that the debut was hopelessly flat, saved only by a confessional Q&A with Secretary of Education John B. King, Jr.

Handler wants us to know she’s just as dumb as we are … to a point. She built the whole first episode around her lack of a college sheepskin. The series will be her way of enlightening herself … and us.

That’s novel and innovative. She can’t play it both ways, though. She can’t admit she’s intellectually challenged and then accept Clinton’s credentials without a scrap of context.

Handler deserves credit for bringing on Pitbull to discuss, in part, his efforts to bring his celebrity clout to the education arena. He’s the driving force behind a charter school in Miami. That’s something you won’t hear much about on “The Late Show” anytime soon.

Handler didn’t dig into the topic, though. She let Pitbull open up about the need for education, not why charter schools offer a possible solution to the current educational crisis in the country.

Handler can make a segment as long – or short – as needed. She’s in charge, and there’s no censor to stop her from speaking.

We’ll have to wait and see how “Chelsea” progresses. So far, it’s one small step forward and another foot planted firmly in the present.