Now, with a second season of “Catch a Contractor” about to begin, anyone who sees Skip or Alison at their door knows what to expect. And it isn’t pretty.

“It’s like backing a wild animal into a corner. It gets heated very quickly,” says Skip Bedell, co-host of the Spike TV series which takes contractors to task for not fulfilling their obligations. “No one heard of us before. Now, the word has gotten around.”

“There are a lot more heated exchanges, a lot closer to physical [confrontations],” adds Alison Bedell.

Season 2 of the show, which stars the married Bedells alongside comedian/contractor Adam Carolla, expands each episode to a full hour.

“Last season was a little rushed,” Skip Bedell says. “Now, we’re able to focus on everything we’re doing with the construction. It’s the biggest part of the show.”

Come for the highly awkward confrontations. Stay to learn a trick or two about home repair.

“Catch a Contractor,” which returns at 10 p.m. EST Sunday Oct. 5, focuses on the South Los Angeles region only. Sadly, the plague of shady contractors isn’t isolated to that region.

“Everyone can relate to the topic,” Skip Bedell says.

That doesn’t mean every contractor tip the show receives pans out. The couple says sometimes the homeowner crying foul already cashed a check meant to compensate them for the problem. Other times, the homeowner has a criminal record, and the show’s research team must tread carefully to ensure their complaint is credible.

In one situation, the show started out tracking down a contractor but ended up turning on the homeowner halfway through the investigation. (Skip Bedell offers 11 tips on how to pick the right contractor as well as ways to avoid the worst ones) 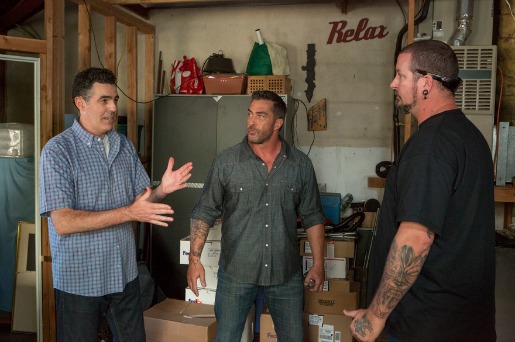 One surprising part of the show is the soft side shown by Carolla, the erstwhile “Man Show” innovator.

“He’s a very sensitive person,” Alison Bedell says of a man who prides himself on his carpentry skills. “He doesn’t joke off about everything … he appreciates things done for him. He’s not the type of celebrity who expects things.”

As for the targets of their stings, Skip Bedell says they don’t arrive with the same intentions. Some truly wanted to do a good job but lack the expertise to complete the gig. Others are criminals, no questions asked.

“They have a good smile, a good pitch,” he says. “And they try to pull as many deposits out of people as they can.”

The show offers home repair tips, the satisfaction of seeing crooked contractors get what’s coming to them and Carolla’s signature wit. There’s a serious side to the show all the same.

“It’s about the victims,” Alison Bedell says. “A lot of these people have kids, and the house was made unsafe … their whole lives have been affected.”

In some cases the construction nightmares helped split up families, Skip Bedell adds.

“They couldn’t handle the stress of it anymore … it’s changed their entire lives,” says Skip Bedell, who vows the program is “100 percent non scripted.”

“For anyone who thinks it’s set up, it’s not. This is the first time [contractors] ever see us.”

DID YOU KNOW: Skip Bedell got an early training with tools by working alongside his father and grandfather, two master craftsmen who worked on buildings across Long Island.