Iron Man has the cool suit. Spider-Man swings from amazing webs. And the Vision is just flat-out neat.

The true hero in the third, deliciously overstuffed “Captain America” film is Mr. Red, White and Blue himself. 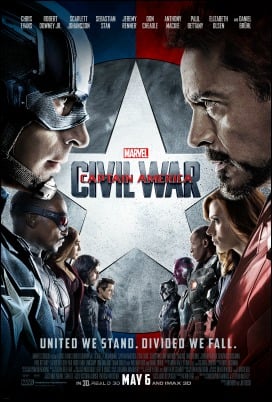 “Captain America: Civil War” lives up to its advanced billing. And then some. It’s the “true” sequel to “The Avengers,” lapping last year’s sloppy “Avengers: Age of Ultron.”

On paper, “Civil War” should be an even bigger mess.

The opposite holds true here.

Who would you take out from the film’s battle royale, a spectacle sure to reduce every member of the audience to their 13-year-old selves?

Can we watch it again? When?

Once more, Chris Evans is Captain America, a soldier frustrated by the new rules of engagement. The Secretary of State (William Hurt as Gen. “Thunderbolt” Ross) wants the Avengers to work under the auspices of the United Nations.

No, not the morally bankrupt body we’ve come to know and loathe. This is the movie version, which actually clicks as a cohesive unit.

The world sees the Avengers saving the day, again and again, while also racking up collateral damage. That makes them little more than super-powered vigilantes, officials argue. They must do their heroism the right away, by seeking permission before rushing into battle.

Not so fast, counters Cap. He thinks the Avengers need to be autonomous, and that government restrictions can only slow them down … and maybe cost lives.

The battle lines are drawn. Neither side is willing to budge. There’s only one way to settle matters. And it won’t come without a price.

Directors Anthony and Joe Russo proved they were perfect for superhero projects with “The Winter Soldier.” That movie combined dizzying action with a grounded tale tied to the War on Terror.

With “Civil War,” they add humor to their formula in an effortless fashion. You’d be hard-pressed to find a 2016 comedy with bigger, richer laughs.

Of course, “Civil War” isn’t just another superhero sequel. It’s meant to revive a franchise and kick start a new one.

It’s two for two for anyone keeping score.

The movie brings Spider-Man back in the form of an agreeably goofy Tom Holland. He’s an awestruck teen recruited by Iron Man to fight on the government’s side. Holland brings a boyish charm to the role, along with the ridiculously young Aunt May (Marisa Tomei).

Spidey isn’t alone. “Civil War” inserts the noble Black Panther into the mix. Chadwick Boseman, an actor destined for superstar status, may have found the role to make that happen. He’s just one of several comic book characters in the battle, but he stands out all the same,

And whatever doubts we had about Paul Rudd’s Ant-Man character are officially kaput. He’s hilarious as the accidental hero, one given the film’s geekiest screen surprise.

Evans’ Captain America may seem like a footnote given the crush of new and old faces. He’s actually essential to the story, providing the moral compass a film of its ilk demands. It’s easy to brush off his work and say, “this isn’t Shakespeare, it’s a superhero movie.” Bringing Captain America, a character embodying the very best of this nation, to the big screen is a task Evans handles with continued grace.

If only “Captain America: Civil War” were as flawless as its fight sequences. The figure pulling all the strings (Daniel Bruhl) embodies an arc with precious little payoff. It’s amazing to think how much work – and cash – went into “Civil War.” Yet a critical story line barely stands up to basic scrutiny.

And the film’s main conflict doesn’t have a true conclusion, although that may be part of the MCU grand design.

“Captain America: Civil War” is a shiny product meant to make millions for Disney. It’s part of our franchise age, a film to be consumed across the globe without offending any nation or people.

It’s equally true that the first film of the 2016 summer movie season may be its best.