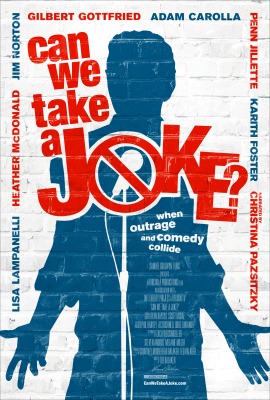 If “Can We Take a Joke?” only covered how PC instincts are strangling comedy it would be a worthy documentary.

There’s far more in play with this critically timed “Joke.”

That makes “Joke” the most essential documentary of the year.

“Can We Take a Joke” opens with a mashup of celebrity apologies. Lip-biting stars attempt damage control for saying the wrong thing. Or offending the wrong people.

Does it even matter?

It’s the perfect segue for a film exploring free speech in western culture. Spoiler alert: It’s on the decline.

Ask Chris Lee, a black college student who tried to mock our “outrage” culture with an original musical engineered to offend. He even warned every patron going in that was his mission.

He paid dearly for his troubles all the same.

Consider Justine Sacco. She attempted to mock white privilege with a tweet about AIDS in Africa. She subsequently lost her job, endured death threats and found her professional life in tatters. All while she was sat in an airplane, oblivious to her world crumbling below her.

All for one lame joke.

And then there’s Lenny Bruce. “Joke” retells the comic’s tragic life, connecting his First Amendment battles to the ones being waged today.

The Sixties-era firebrand had police attending his comedy routines, waiting for him to utter an obscenity. He did. They pounced.

Bruce became the poster child for free speech, a tragic figure who OD’d at the age of 40.

The comic giants who came after Bruce say he did nothing less than change the culture. Only the last few years have seen those changes rolled back.

The PC problem is worst on the modern college campus. It’s not just the students who can’t take an opinion that doesn’t square with university groupthink. School administrators are equally at fault, slamming the door shut on opinions they deem offensive.

“Joke” quietly shames media outlets for not covering these PC horror stories. This critic, a voracious news consumer, had never heard Lee’s story before. He deserves to be lifted atop our collective shoulders for his bravery, not ignored by media too eager to obsess on the latest Kanye West feud.

They add context and color, yet their story isn’t what truly matters. It’s the culture that’s at stake, and those who embrace free speech are losing.

“Joke” likely boasts a small budget, but its slick production values and crisp editing suggest money very well spent. The film is broken up into engaging chapters, each hammering home how a society that lets everyone speak is stronger for it.

Yes, even if that means listening to the loons at the Westboro Baptist Church.

What “Joke” lacks is the fevered opposition. Let’s meet the people who think we cannot handle free speech, the university officials who draw these ghastly lines in the sand.

Their inclusion might have disrupted the narrative. It’s worth the risk. Exposing them could have given “Joke” even more importance.

Penn Jillette on Being Offended - Outtake from 'Can We Take A Joke?'

“Can We Take a Joke” strains to keep ideology out of the equation. We do see video of George Carlin correctly connecting liberals to the modern PC scourge. Carlin, who died in 2008, proved prescient in his diagnosis.

Otherwise, the film says free speech is a bipartisan issue. In theory, that’s correct. Then again, who are the ones defending free speech the loudest today? And who can’t wait to shut down those with whom they disagree?

For once, here’s a movie that demands a sequel.

What “Joke” reminds us is that political correctness doesn’t discriminate. It savages black and Hispanic lives as hungrily as it devours whites. And apologies typically aren’t enough.

Early on we see the host of “Jimmy Kimmel Live” trying to make amends for an offensive joke. He stands before a media throng, doing his darndest damage control. The crowd, clearly not satisfied, wants more.

RELATED: What Is Cancel Culture … and Why Should Artists Fear It

I can only apologize so much, Kimmel says. Apologies aren’t always the goal, the assembled comics warn.

“Joke” isn’t about the ability to tell a naughty joke, even if the banter throughout gets a bit naughty. Sometimes digging deep into uncomfortable subjects is how we process them best. We poke. We prod. We argue. And, a time later, we’ve come to grips with the best way to handle the subject in question.

That’s lost today in the swirl of PC rules and regulations.

“Can We Take a Joke?” ends on a positive note. Anyone observing our popular culture may beg to differ.

IF YOU LIKED ‘CAN WE TAKE A JOKE’ … you may be ready for “The Aristocrats.” The 2005 documentary lets legendary comics tell their own version of one of the dirties jokes ever written.