The subject is Adam Jones (Bradley Cooper), an ex-wunderkind of the Paris kitchen scene who fell off the grid when he delved into his addictions to drugs, alcohol and women.

Years pass, and a now-sober Adam plots his comeback: take over a London restaurant and win his third Michelin star. That’s the unofficial badge of honor in the prestigious world of fine dining.

Along the way he needs to deal with an old flame, a heavy debt to drug dealers and his unquenchable desire for perfection. There’s also another chef to consider, the attractive Helene (Sienna Miller). She’s the only one to challenge Adam’s inflated ego because, you know, this is a movie.

The one thing “Burnt,” available now on Blu-ray and VOD, gets right without question is its respect for chefs and the niche world they inhabit. The cooking and food presentation is photographed to perfection by director John Wells. Steven Knight’s screenplay gives the cast some insightful moments that envelop us within this foreign world.

One includes Jones defending the virtues of Burger King. Others show intense yelling, preparation and tension in the hours of dinner service. Watching these chefs bark and dance around each other in the pursuit of making good food illustrates the fine art of cooking and the passion chefs have for it.

“Burnt” still can’t live up to its potential. Despite some unique moments and the impressive ensemble (shout outs go to Cooper, Miller and Daniel Bruhl), “Burnt” lacks the fire in execution the main characters possess when in front of a burner. 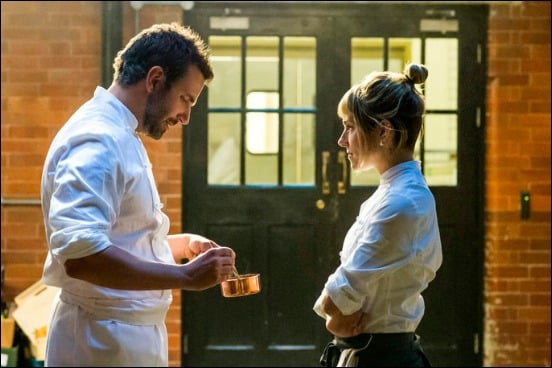 “Burnt” has a lot of characters and plenty of story to present. Not only is it trying to act as a window into this different world, but there’s Jones’ drug addiction, his romance with Helene, Helene’s own home life which includes being a single mother, the pursuit of this Michelin star, the list goes on and on.

There are so many interesting beats between the supporting characters it should have been fleshed out into a dramatic series. That would make sense in this golden age of long-form storytelling. The format would get into the souls of these characters and discover the dark corners and peaks of their profession.

Instead we are left with a movie that too often is forced to used broad strokes when servicing its characters and their relationships.

The Blu-ray edition includes a commentary with director John Wells and Executive Chef Consultant Marcus Wareing, deleted scenes and a feature delving into Cooper and his preparation in playing a skilled chef.

DID YOU KNOW: Famed chef and television personality, Gordon Ramsay, is an executive producer on “Burnt.”