Beth Nimmo insisted any movie portraying her daughter, who died in the Columbine High School massacre, avoid one thing above all else.

“That’s not who she was,” says Nimmo, who lost her daughter 17 years ago in one of the deadliest school shootings in U.S. history.

The real Rachel Joy Scott struggled, like most teens do, in “trying to live out her faith in a public way,” Nimmo says. “The failures, the shortcomings, the doubts and fears. All of that I insisted in being portrayed.”

,” available now on home video, honors that wish. The movie shows how Rachel (Masey McLain) grappled with being a conflicted Christian. Her journey got interrupted by two Columbine students who killed her along with 12 other people on April 20, 1999.

Rachel refused to renounce her faith even as the killers gave her one last chance to do just that.

Nimmo held creative sway over “Ashamed.” She worked as an executive producer on the film alongside trusted collaborator Benny Proffitt.

“We shared the same vision of how Rachel’s story should be used, not for personal gain but to share Rachel’s writing and drawings and her love for the Word and love for people,” Nimmo says. “He allowed me to have a say in how the story is being told.”

Nimmo wasn’t familiar with Hollywood machinery before “Ashamed,” but she knew exactly what the movie shouldn’t do.

There is something worth dying for.

The film’s casting process would prove just as critical to the film’s fidelity to her daughter’s life.

“It couldn’t be just any actress to play Rachel. It had to be someone who had those same core beliefs as a Christian to depict Rachel in an authentic way,” says Nimmo, who came away impressed when McLain auditioned for the lead.

“There was an authenticity to her that rang true. She’s a very strong Christian girl. Her personal values and conviction … they were relevant and necessary,” she says.

Nimmo helped McLain prepare for the part, the biggest of the actress’ young career. She received Rachel’s writings, spending her nights during the production going over them.

“She got inside her skin,” Nimmo says.

RELATED: The Faith Based Film Revolution Is Here

Nimmo has been a public figure ever since the 1999 tragedy. She reached out to the mother of Dylan Klebold in a remarkable sign of healing. So she’s no stranger to comments about Rachel’s legacy.

The film’s release only increased the amount of feedback from the public.

“The thing [audiences] appreciated the most was the struggle of it,” she says. “That’s where these kids are … most people live their lives struggling to do the right thing. The truth is, I don’t care how many times you sit in the church pew. You still have to go out and live that in a real way. It’s not all shiny and wonderful. There are times you fall flat on your face.”

There’s a reason Nimmo supported a film project like “I’m Not Ashamed” as a way to keep Rachel’s legacy alive. Pop culture matters.

“I was honestly hoping it would reset the values locked in the culture we’re in right now,” she says. “There is something worth dying for.”

She wants people to do more than see “Ashamed.” She wants them to feel empowered by it in an increasingly secular society where the parents’ role holds less sway.

“It’s O.K. not to follow the mainstream, not to be a cultural follower,” she says. 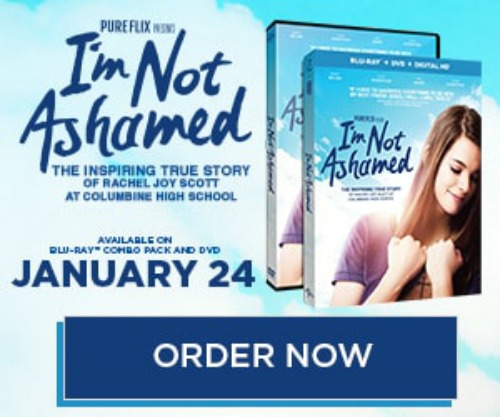