The film takes a satirical look at the culture surrounding modern Christianity, showcasing four young men who con the faithful for a fast buck.

Bakke, now 26, says his younger self wasn’t ready to accept the kind of questions “Believe Me” asks about faith.

“Why do you believe what you believe,” Bakke asks. “The through line of the movie … is the idea of seeking the truth. That resonates with everybody. It’s not an exclusive idea of Christians.”

Alex Russell stars as Sam, a college student who learns he doesn’t have enough money to complete his education. So he starts a sham Christian charity to pay the bills, helped by his three loyal chums (Zach Knighton, Max Adler and Sinqua Walls).

“Believe Me” is the first narrative film for Riot Studios, the group behind “Beware of Christians” and “One Nation Under God.” The filmmakers embrace Christianity, but they refuse to produce the kind of Christian films audiences have come to expect.

For the company’s newest film, that meant poking fun at people of faith in a delicate fashion.

“You have to keep it lighthearted while also maybe opening up people‘s minds to serious ideas,” Bakke says. To do so, the cast and crew targeted social structures, not religious tenets.

“We keep all of the jokes on the culture of Christianity rather than the message behind Christ,” he says.

“Believe Me” features a young, engaging cast, something Bakke feared wasn’t possible when he started the project.

“We were told this is gonna be a tough process,” he says. “It’s a little bit of a death wish for actors to get involved [in spiritual films].” Talent often fears their personal beliefs will get dragged into the marketing and distribution of the film, Bakke explains.

That’s why he was delighted when Russell signed on, even though the actor’s spiritual views differed from his own.

“We got along pretty well. We’re the same age. We had different religious beliefs but we found common ground … in the importance of asking questions,” Bakke says.

Nick Offerman, who has a cameo as a burned out counselor, is open about his atheism. Yet other stars, like Johanna Braddy, had similar Christian beliefs to the film’s creative team. That led to some constructive dialogue behind the scenes. 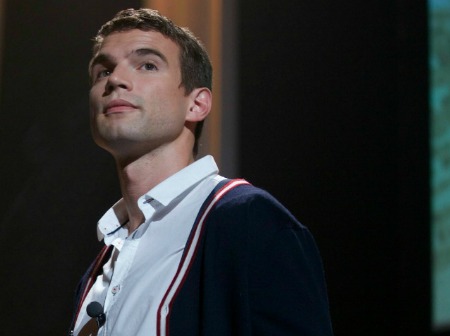 “On set, the attitude all around us was, ‘Man, I’m meeting Christians like you guys that I never met before. I had a picture of what you guys would be like,’” he recalls. “We can laugh at ourselves. We’re fully aware of how silly a lot of this stuff looks.”

Bakke began Riot Studios with his fellow high school chums Michael B. Allen and Alex Carroll. They went their separate ways during their college years but got together each summer to make movies.

“Growing up, the reason why I made movies about Jesus in the first place was that there weren’t any movies that talked about Christ that didn’t make you roll your eyes,” he says.

The debate he has with Riot Studios is how to approach the spiritual community.

“Can we challenge Christians … without patting them on the back the whole way through?” he asks.

“Believe Me” is available now on home video through Walmart, Target and Amazon.com.