How much can one family endure?

The mother in “Bad Hurt

” cares not just for her “retarded” adult daughter – that’s what they called her years ago, and that’s good enough for her, mom says. She also tends to an adult son who once had a promising baseball career.

War changed all that.

“Bad Hurt” should be depressing. And boy, is it at times. But seeing a hard luck family find moments of bliss balances the heartache. Delicate, lived-in performances that shatter New Yawk stereotypes make “Hurt” an uplifting story.

The story opens in Staten Island circa 1999, a time when the Gulf War ended in unabashed victory for the U.S. and its coalition partners. That’s hardly comforting for the Kendalls.

Elaine Kendall spends her days caring for her three grown children. DeeDee (Iris Gilad) is mentally challenged and clings to a job where her boyfriend works. She needs round the clock supervision.

The oldest son (Johnny Whitworth) hasn’t been the same since coming back from the war. He stays in his room, chain-smoking cigarettes and whatever he can sneak into the house.

And then there’s Todd (“Sons of Anarchy’s” Theo Rossi). He’s a metro bus driver who longs to be a cop. He’s the only self-sufficient child, but he’s racked by self-doubt and still lives at home.

The family patriarch (Michael Harney) appears detached from it all. Is the pain too much? Or is he coping in the only way he knows how?

“Bad Hurt” flirts with mainstream movie beats. An unlikely romance. A fledgling police career. A father who can’t even give his son an “atta boy” speech. The filmmakers aren’t interested in those paint-by-number plots. 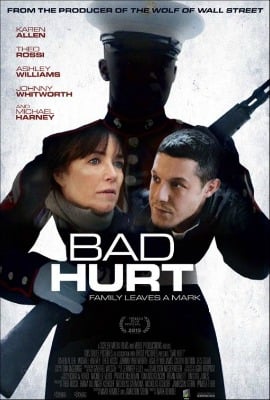 FAST FACT: Theo Rossi is a Staten Island native went back home before Hurricane Sandy hit in 2012. He visited a series of shelters in the hurricane’s wake to offer support for those who needed it most.

There’s a tenderness to “Bad Hurt,” a side of the New York persona rarely showcased. Yes, they’re gruff and world weary. There’s a bond between the characters, even the cranky neighbor who just wants the daughter to stop screaming so much. It’s the barkeep who offers a free drink to a woman in need.

Rossi can do the tough but tender routine in his REM sleep. He’s still a potent force, a man inextricably tied to his family through guilt and love.

Harney (“Orange Is the New Black”) gets the toughest assignment. He’s seen as cold, even cruel at times. It’s the weight of the years, the imperfect family, pressing down on him.

The third act reveals feel precious at times. An anti-war sentiment begins by revealing that any war stains the soul. It takes on a more heavy-handed lilt soon enough. Another revelation arrives from left field and, frankly, isn’t needed.

DID YOU KNOW: Mark Kemble says “Bad Hurt,” based on his play “Bad Hurt on Cedar Street,” is unabashedly autobiographical. He calls it, “twenty years of my family condensed into Christmas week.”

Playwright Mark Kemble makes a smooth transition to film direction. He also coaxes note-perfect performances from every key player. Allen is particularly good as a parent who simply won’t give up on her children. It should be a thankless part. Instead, it’s transcendent.

“Bad Hurt” gets the small details right. The feel of the family’s blue-collar home. The camaraderie between neighbors. It’s never condescending, just empathetic.

Some families simply have a bigger burden than others. “Bad Hurt

” shows even those clans can persevere if they remember what matters most.