The Colo.-based Daly would laugh when “The Soup” host Joel McHale mocked the way Green read his lines on the tabloid TV show. Then Daly saw Green being interviewed about his other career – best-selling author.

“It blew me away,” Daly says of the interview. “I had this completely different perspective on him.”

Daly bought one of Green’s books and realized writing was something he should be doing, too.

“He had this great narrative voice,” he says of the ex-NFL player. “It inspired me to take my writing to the next level.”

Daly already had a steady, well-paying gig as a software developer. He wanted something more.

So he started writing online movie reviews when time permitted. Later, he tackled newspaper editorials. Then he introduced Sean Coleman to fiction fans via “From a Dead Sleep

“When you have this opportunity to go in a different direction, it’s pretty rewarding,” he says.

'From A Dead Sleep' Book Trailer

He didn’t want his first book’s character to be like every other genre hero. Most protagonists are “squeaky clean,” he says. “Those characters tend not to interest me too much. I feel more drawn to flawed characters. I had a lot of friends growing up who were good people but they were their own worst enemies.”

Sean Coleman is just such a figure. He witnessed a suicide in the book’s opening passages, but no one takes him at his word. His toxic reputation precedes him.

So Sean must investigate the truth behind what he saw, a journey which will bring him face to face with something far worse than poisonous word of mouth.

“I’m a big believer in redemption … he has this opportunity to start his life over,” Daly says. 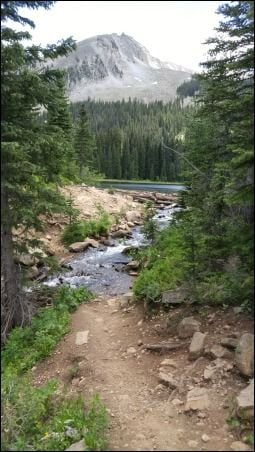 The story is set in the Colorado woods, which ties into Daly’s favorite authors like Cormac McCarthy. It also opens up a rich creative vein.

Mountain towns offer vibrant survivalists and supporting players with in-depth back stories. Those details have drawn his fellow Coloradans. The backdrop offers a broader appeal, too.

“I’ve gotten a number of readers from the UK and Australia. To them, it’s an exotic backdrop,” says Daly, who currently contributes to former CBS news reporter’s BernardGoldberg.com.

That gig speaks to his right-of-center sensibilities. Readers might pick up on it while perusing “Sleep” or its follow-up, “BLOOD TRADE: A Sean Coleman Thriller

“You’re not gonna be turned off by the book with any blatant political references,” he promises. Sean Coleman does mock his brother-in-law for voting for Al Gore, but it’s used to define the differences between the characters, he argues.

“I’m not trying to make any political declaration,” he says, although conservatives may relish reading about a “rugged individual” like his signature character.

“I do a lot of political writing. It’s nice to compartmentalize like that,” he adds.

That doesn’t discount the potential influence of politically-charged content.

“The electorate, for the most part, is much more disengaged than it’s healthy to be … they take their cues from pop culture. If politicians want to build their support, they have to enter the pop culture realm.”

Donald Trump’s ability to host “Saturday Night Live” and thrive in our celebrity culture has gone helped his unprecedented rise, he says.

Daly recently submitted his third Sean Colemn thriller to his publisher. He says we can expect to see it on book store shelves by Spring 2017.

He still recalls the days when he kept his own writing hidden from others. He doesn’t mind sharing his work with the world now, but he advises fledgling artists to keep a kernel of his old approach.

“Don’t worry about people you know and what they’ll think [of your work]. Keep the reader in mind from a sensible standpoint,” he says. “Never worry, ‘what’s my Mom going to think of this.'”