It’s not easy defending a rigorously bad movie like “The Assignment.”

The film’s director, Walter Hill, is the cagey veteran behind “The Warriors” and “48 Hours.” Co-writer Denis Hamill is a respected author and New York Daily News scribe.

The thriller is a dud all same. Critics aren’t simply hammering the movie for its outsized flaws. Reviewers are aghast at the subject. A maniacal surgeon transforms a male hit man into a woman for vengeance’s sake.

In our trans-aware era, that simply won’t fly.

“I’ve liberated you from the macho prison you live in,” coos “The Doctor,” a mad surgeon given far too much integrity by Sigourney Weaver. 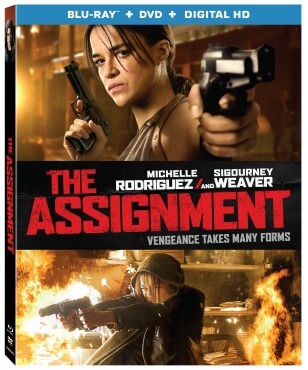 Seems Rodriguez’s character, Frank Kitchen, killed the doctor’s brother. Now, the doc is out for revenge and she isn’t interested in the standard “bullet in the head” method.

She’s nuttier than that.

“The Assignment” is a B-movie to its core, only the cast and crew aren’t quite aware of it. The setup is absurd. Frank doesn’t have a scar on him following the surgery. Rodriguez’s manly turn is wildly unconvincing. And the killings are right out of a grindhouse workshop.

A generic one, at that.

So why is Weaver earning every penny of her paycheck? Doesn’t she realize the finished product will feature graphic novel-style segues and an overwrought score?

Rodriguez’s participation here must have looked good on paper. The actress’ beauty isn’t of the porcelain variety. She’s got a natural gruffness that her peers lack. That propelled her star-making turn in 2000’s “Girlfight.”

And she’s in top physical shape, so her body looks like it has some muscle on its frame. She’s still lost here, unable to locate her character. The generic screenplay hardly helps.

So why are critics so enraged by the finished product, above and beyond your average clunker? Here’s the Patriot Ledger mocking not just the film but the filmmakers… personally.

But transphobia is the least of this mindless exercise’s multitude of problems, beginning with the fact that the premise is so laughably implausible that you can barely keep a straight face. It comes as little surprise that it was assembled by a couple of straight men in journalist Denis Hamill (brother of the N.Y. Post’s Pete) and Walter Hill, who also directs.

GLAAD attacked the movie before seeing it

“We haven’t read the script, but it’s disappointing to see film-makers turning what is a life-saving medical procedure for transgender people into a sensationalistic plot device,” the organisation’s director of programs for transgender media, Nick Adams, told The Hollywood Reporter. “We are at a crucial moment in the public’s understanding of transgender issues, and stories like these have the potential to undermine the progress we’ve worked so hard to achieve.”

So that means certain subjects are off limits? That’s now how the First Amendment works. Besides, this isn’t a transgender story. Frank didn’t choose to change his body. And, after the change, he continues with a sexual relationship without the partner batting an eyelash. Isn’t that a sign of acceptance, smack dab in the middle of an absurd thriller?

The Salon review of “The Assignment” is even more overheated

It would be tempting to call “The Assignment” a sh**ty miracle, except that it is undeserving of being compared to sh**. While poop is disgusting, smelly and proved a public nuisance in the days before modern toiletry, fecal matter has wonderful properties. For engineers trying to decrease humankind’s dependence on fossil fuels, dung has proven a surprisingly useful fuel source. The only conceivable use for “The Assignment” is burning all copies of it to heat America’s orphanages, and the orphans would probably request a better movie to warm their hands next to. They have standards….

Whether you’re a trans person outraged that the film reduces your existence to a straight man’s nightmare or someone who appreciates even basic logical consistency from your entertainment, this is not the movie for you.

If your gender got changed overnight without your blessing you might be alarmed, too, no matter how “woke” you might be.

Heck, if anything the movie is feminist to its core. The surgeon changes a killer thinking his savage male side instincts might be muted by an extreme makeover.

And, spoiler alert, there may be some truth to that according to the story.

“The Assassin” is a lousy movie. Period. The hyperbolic attacks on it speak volumes about how some critics punish artists for following their muse in any direction they choose.