Andrew Klavan got the oddest looks whenever he’d warn friends and strangers about the looming culture wars.

“We’ve lost this country at the movies,” Klavan recalls saying to bemused reactions, at best. “I had to laugh so I wouldn’t cry. They were looking at me like I was cute. What on earth was I talking about?”

“Now, I get the phone call, ‘you were saying something about this,” he says.

Klavan, a celebrated author, screenwriter and Daily Wire podcaster, predicted much of what’s happening in 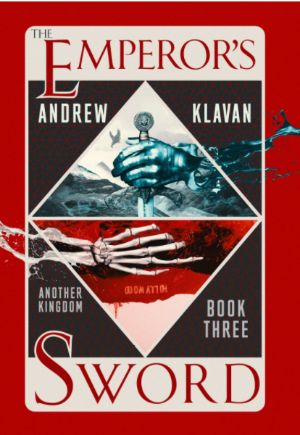 western culture years before his colleagues. The Left’s dominance over Hollywood, academia and the media led to this moment, when having the “wrong” thought can mean career cancellation and speaking freely requires nerves of adamantium.

Keen readers can sense some of that unease in Klavan’s new book, “The Emperor’s Sword.” The final chapter in his “Another Kingdom” trilogy finds hero Austin Lively caught between two worlds, and the stakes couldn’t be higher.

Austin’s screenwriting dreams are about to come true, but he’s forced to examine the price he’ll pay for it, along with countless others.

“It’s almost storytelling about storytelling,” he says of the third chapter in his latest trilogy, one that marries a sturdy narrative with expansive thoughts on the values we hold dear.

“The incidents that happen in our little slice of history will come and go. People will forget them,” he says. “At all times all incidents have deep moral meaning. You have to address that to be both a human being and an artist.”

His books aren’t preaching a political ideology despite his right-leaning views. No, a Klavan tale taps richer themes that connect with any reader, like “the heroism it requires to speak the truth in a corrupt world.”

RELATED: Klavan – It’s Only Getting Worse for Hollywood Conservatives

The author is no stranger to trilogies, but for his latest project he shook up the template. The structure came to him, he says, like a stork delivering a baby. Trilogies often sag in the middle portion, he says, but he shaped “The Nightmare Feast” to seemingly wrap the saga one book early while leaving “a little doorway open” to a final chapter.

“The Emperor’s Sword” takes a withering look at Hollywood, an industry Klavan got to know intimately while penning screenplays like “A Shock to the System” and “Don’t Say a Word.”

“The cliché about Hollywood is that it’s people doing dirty business on each other … they’re selling their bodies and souls. It’s a cliche for a reason … there’s truth to it,” says Klavan, noting he’s seen the haunted look some artists have after they’ve made one concession too many. “The stakes in Hollywood are so big, the deals move so quickly between art and commerce. It’s very easy to lose your soul.”

Klavan recently reduced his Daily Wire podcast workload to one long show a week, a shift he calls “bliss.” He wasn’t meant to rail against every daily injustice. Instead, the new format lets him put news into a “bigger cultural context” like those who profit off of racial panic.

The revamped show ponders the best responses to the “period of lies” we’re living through today, he says.

The new schedule also allows more time to tackle different projects, including work on The Daily Wire’s emerging content platform. [Editor’s note: This reporter also contributes to The Daily Wire’s news site] He says the site is working on several narrative projects at the moment.

That platform offers a tough choice for “cancelled” artists.

Joining The Daily Wire’s entertainment slate could end an artist’s chances of working with a studio like Disney down the road, but he promises the site is “committed” to seeing the entertainment division through.

“This is the battle, the thing that has to be done,” he says. I’m very hopeful. It’s the right thing to do and the right time to do it.”

He understands why others are finally understanding the scope of that mission. He credits President Donald Trump for opening many people’s eyes, at least indirectly.

“We saw what they did to Donald Trump. The culture, corporations and government all turned against him as one. They lied and lied and lied to get him out of office. It was shocking to see,” he says, leaving many to realizes how far the culture had fallen. “’Oh, I get it … they have no commitment to the truth.’”

Add the character assassination of Justice Brett Kavanaugh and calls to end free speech, and suddenly more people are waking up to the rot in the public arena.

Klavan’s conservative mien, combined with a distaste for the industry’s practices, means he won’t be signing a three-picture deal with, say, Universal anytime soon. It doesn’t bother him a bit.

“Getting a lot of money from Disney to write some woke crap… that would not make me happy,” he says. “I wish a lot more people felt that way.”