The president of the country’s second biggest theater chain suggested last week it might allow texting in theaters.

The issue won’t go away all the same.

This critic never talks or texts during a movie, but I found a silver lining to Aron’s suggestion. B.J. Bethel, an Ohio-based journalist who covers sports and entertainment, vigorously disagreed.

So I reached out to him for the following cyber-debate on texting in theaters:

Bethel: Christian Toto, a civilized critic if I’ve ever known one, has fallen to the side of the vulgarians – or texters – as Kevin Williamson would say. Williamson is a roving correspondent for National Review, who was thrown out of a showing of “Natasha, Pierre, and the Great Comet of 1812” several years ago for tossing a smartphone across the theater after the woman refused to stop operating it during the presentation.

I’m fortunate to live in an area where I can attend a first-rate cinema and watch any major picture for $6, but buying a Pepsi and a small popcorn may put your grand kids in debtors court. That cash goes for two hours of enjoyment – of escape. 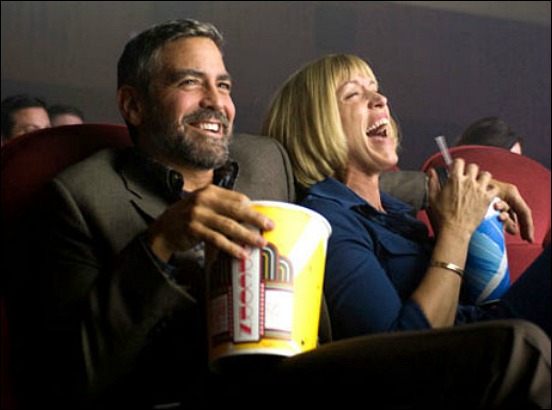 As someone working deep in the thralls of digital media I need that escape. I crave it. My phone is off when I enter, and any texters or serial Snap Chatters within my peripheral vision beware.

If taking a phone from a 22-year-old adult is like “cutting their arm off,” as the owner of AMC theaters has said, letting them continue their addicting habit in a quiet and public place is enabling. There are common rules for behavior in public. One of them should be no texting in the theater. Let’s bless those born in the ’90s with a gift – silence and a chance at undivided attention. With student debt, the job market, they deserve it.

HiT: I agree with every syllable. And then there’s reality.

In our world, people not only text to their heart’s content in theaters, they also talk. And talk. And it’s been that way ever since that jerk in front of me blabbed all the way through “The Empire Strikes Back” in 1980. Movie theaters too often don’t enforce their own rules, and generation after generation have grown up without understanding the basic etiquette rules of the theater.

So let’s cordon them off, shall we? Set up theaters where you can blab and text to your heart’s content, And then, in the adjoining theater, show the same movie without allowing either action. And enforce it, Alamo Drafthouse style.

Voila! You’ve helped the talker/texters voluntarily check themselves into a theater along with folks who consider watching movies a participatory event. And the rest of us can go to the second theater and just let the film wash right over us….

Bethel: The two issues I see:

1. Cordoning texters and talkers into their own theater doesn’t guarantee texting and talking stops in theaters where it’s banned. If anything it enables the behavior and will make it worse in theaters across the board. Theaters poorly enforce rules now, there’s little to think condoning texters into their own theater will change that behavior overall.

2. The digital addiction behavior needs to be battled against in public life. High school and college grads (the last two years) grew up in the smart phone and texting era, and their social skills are non-existent.

In a recent article in The Atlantic, students are so focused on their phone they have no skills for interacting in a group setting or within the context of a boss. One recruiter said most of their new grad hires last just months. The main reason for termination? They can’t get to work on time because they don’t live within the context of human interaction and responsibility. Giving in to that in the theater is the wrong thing to do.

HIT: I think you’re trying to fight a larger culture battle within the confines of a movie house. It’s just not going to work, sadly, even though it pains me to hear about the millennial malaise in action.

As for enforcing the new rules, I think the public will make sure it happens … or else. Movie attendance isn’t growing, and if people pay $11 or so for a non-texting movie experience and still see those lit screens they may not come back. The home viewing keeps getting better, from bigger flat screen to 4K technology. And streaming outlets like Netflix serve up deliriously good programming like “Bloodline” and “Daredevil.” So it’s in the theaters’ best interest to actually police their own rules and coax families out of the house.

The saddest part of this whole debate is watching my own young sons at the theater. Every single time we go I tell them it’s time to stop talking and watch the movie. Period. And they do as daddy tells them. When they get smart phones I’ll revise my rules to include no texting. It’s simple. So why aren’t more parents doing it? How hard is this simple parenting practice?

Bethel: Expectations of behavior are a societal norm. I don’t think it’s a stretch to keep the existing norms for behavior in the movie theater. When I’m sitting and watching the opening for “Freddie Got Fingered 2” (and dammit, they will make this one day).

With 4K and the possibility of a channel dedicated to showing brand new, major motion pictures upon opening, the theater has another front in the battle with technology. I’m not sure texting, open bars with craft beer, free discounts for hipster beards and Lumineers ticket stubs will encourage the hipster set to go to more movies than they do.

I think bunkering down and improving the product they have, bringing snack prices to a much more reasonable level and maybe chains stealing the serial ideas from Netflix, HBO and Amazon could be ways for the theater to survive, maybe flourish. (Theaters often ran episodic serials before television. The much awaited return of the BBC/PBS hit “Sherlock” starring Benedict Cumberbatch was shown in theaters and was drew successfully even as the show debuted on PBS in the United States.

As for why parents aren’t disciplining kids or themselves in public: They don’t want to be the mean parent in public. They also think letting them do what they want is a sign of love. It isn’t. On the other side, pure laziness and selfishness and no concern for those around them.