The man who became the nation’s 36th president following John F. Kennedy’s assassination swore like the proverbial sailor. He used racial epithets we now condemn in no uncertain terms. He also maneuvered the historic Civil Rights Act into existence using all of his political guile.

The Tony Award-winning “All the Way,” playing at Denver’s Stage Theatre through Feb. 28, captures what feels like every move Johnson made on the Act’s behalf.

At nearly three hours, including the intermission, “All the Way” is exhaustively thorough and more than a tad repetitive.

All The Way - Commercial - Denver Center for the Performing Arts
.

“Continuity is what the country needs right now,” the president declared. He also refused to let Kennedy’s work on a Civil Rights Act pass along with him. Convincing Southern Democrats to sign on for the significant legislation wouldn’t be easy.

Working alongside Martin Luther King, Jr. (Terence Archie) while also wiretapping the civil rights icon, helped nudge the act forward. Every step was a battle. Each victory opened the door to new problems that couldn’t be overlooked. After a while the pattern, despite impeccable dialogue, shakes our attention span. 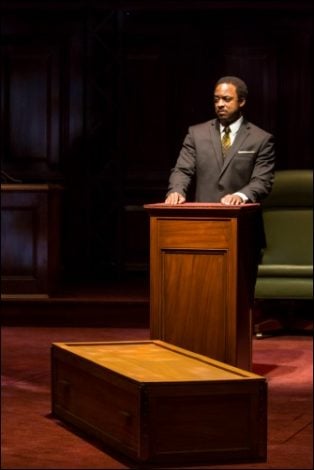 Playwright Robert Schenkkan packs so much information, and history, into the play it’s a minor marvel without considering its dramatic heft. The play’s themes still resonate, from the echoes of the Black Lives Matter movement to modern ideological skirmishes. The occasional anachronism both helps and hurts that sentiment. Did people really talk about “Big Oil” in 1964?

This is a talky affair aimed at our inner policy wonk. The private lives of the president and key players get some attention, but it’s always followed by a foot race back to the Beltway.

When we see the president reveal his own father’s humiliation or watch Lady Bird Johnson (Kathleen McCall) deconstruct her pragmatic take on marriage, we crave more.

It too rarely arrives.

The production captures mostly Democrat politicians talking shop, forging sudden alliances and watching long-held bonds splinter. It also attempts to cast Barry Goldwater, the GOP candidate who got trounced by Johnson in the 1964 election, as a racist.

The tag doesn’t fit. Goldwater helped found the Arizona NAACP and played a role in integrating Phoenix’s public schools. He opposed the Civil Rights Act on libertarian grounds, not based on any lingering hatred. That might have been culturally shortsighted, not to mention lousy politics, but it shouldn’t stain his personal legacy.

Robert Schenkkan Discusses "All The Way"
.

The production demands plenty from Johnson, who rarely leaves the stage and delivers both monologues and impassioned speeches before the public. He’s fiery and convincing, a leader consumed with his craft. The real Johnson’s famous sense of humor gives the performance an imperfect soul.

Archie has a much smaller role as King, but the actor wisely eschews mimicking the icon’s signature traits. The performance still feels larger than life, but mostly because Archie makes King human. His King is keenly aware of his role and the pressures placed upon him. 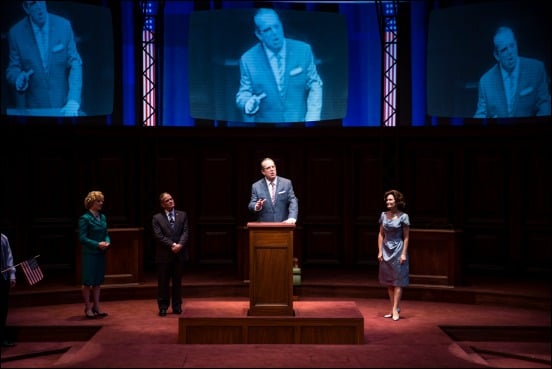 “All the Way” benefits from a clean, effective stage highlighted by a monitor flashing ’60s era stills. That sounds like a perfunctory treatment, but in practice it brings context and color to the proceedings.

President Johnson’s legacy remains in flux. The New Deal almost sounds quaint compared to what dueling progressives like Bernie Sanders and Hillary Clinton are offering for 2016.

There’s far less interpretation needed for 1964’s Civil Rights Act. “All the Way” honors the president’s actions without compromise. It never forgets the flawed man who helped make it possible. If only we saw more of him on the stage.

DID YOU KNOW: Bryan Cranston is reprising his Tony Award-winning role in ‘All the Way’ for an HBO telefilm to debut in May.