Adam Yenser wears his clean comedy brand like a badge of honor.

The former “Ellen” scribe’s Twitter handle says it all, albeit with a saucy twist – @cleancomedian69.

“I like to do some edgy jokes, but I keep it appropriate for most audiences,” Yenser says.

His new stand-up special on Dry Bar Comedy, the undisputed home for family-friendly laughs, proved a perfect fit for Yenser.

Check out my first stand-up special, “Adam Yenser: Not Big Enough To Cancel” now available on Dry Bar Comedy! Use Promo
Code ADAMYENSER to get 1-month free and check out all of their great content!https://t.co/W7jyOwm1L8

The mind behind “Adam Yenser: Not Big Enough to Cancel” says one gag got the heave-ho and a few required minor tweaks to pass muster. The set, recorded in Dry Bar Comedy’s home base in Provo, Utah, let Yenser join a major comedy force at a challenging time in the marketplace.

“It’s been hard for me to find a platform,” says Yenser, who makes no secret of his right-leaning ways. “Mainstream platforms like my comedy until it gets political.”

Yenser worked for years on “Ellen’s” writing staff. More recently, he’s been a star attraction at The Babylon Bee. He contributes late show-style monologues for the comedy showcase as well as co-starring in some Bee sketches.

The Bee is similarly clean and right-leaning, with a dash of faith-based humor.

Working clean, once considered by cynics as a strike against a comic’s effectiveness, is proving lucrative to the Dry Bar brand. Yenser also sings its praises from a more practical point of view.

“Writing clean teaches you how to structure a joke without using the dirty parts just as shock value,” he says.

Even comedians regaled for their blue bits know how to work an all-ages crowd.

Clean comedy also opens up some doors that may otherwise remain shut. Most late night shows like edgy material, but only to a point, he says.

Adam Yenser @CleanComedian69 wrote sketches in high. He hustled to turn a Conan O’Brien internship into a paying job. Eventually he wrote for Ellen and became an under represented member of the Writers Guild of America. https://t.co/qnPMgMGsG4

“Not Big Enough to Cancel” finds Yenser weighing in on vaccine mandates, “anti-vaxxers” and the trans community. Viewers will quickly suss out the comedian’s political bent, but he’s ready for that.

Yenser has thrived despite holding views many industry peers lack. One reason why? He’s not afraid to tweak his own side. Plus, his material isn’t as mean-spirited, or blatantly partisan, as the average late-night comic not named Greg.

He’s also happy to be part of Team Bee, a place where jokes that don’t align with the comedy narrative can be told.

“You can’t get [Bee] material on other platforms,” he says. 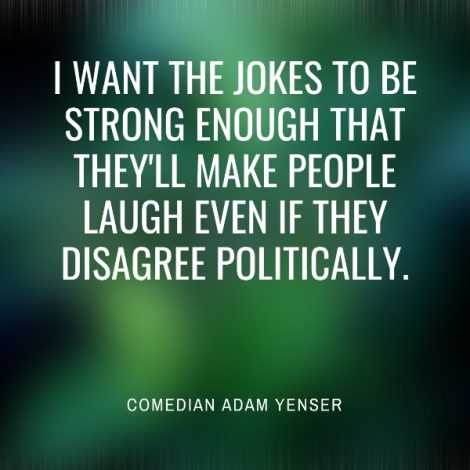 Yenser knows all about the woke revolution, but he sounds an optimistic tone for comedy’s immediate future.

He notes how Netflix stood by Dave Chappelle when the woke mob tried to cancel him for sharing trans jokes.

“That was a huge step in the right direction,” he says, adding left-leaning comics like Chris Rock and Bill Burr have similarly spoken out against woke bylaws.

“There’s a large part of the comedy community that gets frustrated with how super sensitive woke culture is, even if they identify on the political Left,” he says.

Other liberal comics operate more out of fear than fealty to the woke agenda.

“There are people on the Left who are afraid of people further to the Left … they may get eaten by their own,” he says.

He also sees the Bee’s expanding empire as more proof the woke agenda is reeling.

Yenser worked at “Ellen” despite his conservative ideology, but he understands it’s risky for right-leaning artists to be so open. He still hopes others follow his lead. Doing the opposite only emboldens the Blacklist-style forces within the industry.

“They want to intimidate and silent you and make you think you can’t have a different point of view than they have,” he says.

Enter ADAMYENSER in all caps to receive a free trial subscription to Dry Bar Comedy.