In fact, Georgia just announced that theaters will be one of the business categories set to re-open in mere days. Other theaters nationwide will follow suit, albeit slowly.

The flow of patrons will be similarly quiet, at least at first. Normal 2.0 is coming.

Having said that, what will Hollywood 2.0 look like? What will change about the film industry, and what will continue as if nothing ever happened? How will studios and bean counters alike adapt to the cultural changes forced upon them, and us?

The following 7 questions will go a long way toward determining what vision of Hollywood emerges once the pandemic fades.

Will the movie theater experience go the way of “Charlie’s Angels” reboots?

No. Not a chance.

We’ve been hearing this prediction for decades, first when affordable television sets arrived in the 1950s and later when cable TV offered new-ish movies at home. People crave going out to the movies – to flirt with dates, to bond with friends and to soak in the communal bond theaters provide.

What’s more exciting? Watching “A Quiet Place Part II” in your living room or a darkened theater with a hundred popcorn-clutching strangers?

A variety of factors weakened the theatrical experience in recent years, though.

All of the above hurt the film industry, and they’ll continue to erode viewership over time. Audiences will still return to their local cineplex. Eventually.

That’s another topic entirely. Very few actors can “open” a movie in 2020. Ben Affleck sure can’t. The “Good Will Hunting” alum did the press rounds early this year to gin up interest in “The Way Back.” The basketball drama offered a rich character study that brought out the best in Affleck.

THE WAY BACK - Official Trailer

Now, would that film fare better as a top-tier VOD release? Maybe. So far, Hollywood is stingy on sharing numbers from recent movies given an early VOD platform due to the pandemic like “The Invisible Man” and “Trolls World Tour.”

Chances are, a film like “The Way Back” would be a perfect fit for audiences who’d rather stay home, thank you. It’s hardly catnip to teens or 20-somethings. Maybe in a year, or less, similar movies will follow the VOD path.

Studios have plenty to think about in the coming weeks.

The Blumhouse Productions guru traffics in low-budget titles that make tidy profits. That gives him a huge advantage as theaters come back, even slowly. There’s far less pressure on his films to make back their budgets.

Even his “flops” manage that feat in a weekend or two. Plus, his films focus on audience-friendly genres – think thrillers and horror fare.

Blum likes stoking national debates with films like “The Purge” (societal violence) “Get Out” (racism) and, most recently, “The Hunt” (our divided political age).

Blumhouse titles are a snug fit for the theatrical experience, see the communal description above.

Will Hollywood’s political machine take a hit from the crisis?

More recently, prominent stars like Stephen Colbert, Albert Brooks, Jimmy Kimmel and Patton Oswalt have slammed ordinary Americans fed up with their livelihoods getting locked down.

That’s one critical element. Another is Hollywood hypocrisy so massive you can spot it from space.
The industry’s #MeToo movement, so loud during the Kavanaugh hearings, fell silent the moment Joe Biden was credibly accused of sexual assault.

Combine all of the above, plus an effort to elect a man in obvious mental decline, will decimate what’s left of Hollywood’s moral leadership.

One Minute of Joe Biden Staring at His Notes | SUPERcuts! #760

Will indie films experience a bump from the pandemic?

It’s debatable. Indie films are coming fast and furious to VOD platforms everywhere, but so far the quality of the titles has been suspect. For every winner like “Man Camp” or “Resistance” we get clunkers (“Endings, Beginnings,” “We Summon the Darkness”) or movies that can’t live up to their promise (“The Quarry”).

This was indie film’s moment, and it’s unclear if its taking full advantage of it.

How long will it take before the first blockbuster reaches theaters?

I suspect we may get some mid-budget films to test the waters first. Fine. Good. What about “Wonder Woman 1984?” “Tenent?”

Some big movies had summer 2020 release plans lined up, and the pandemic changed most of that. When will Hollywood trust the market enough to release titles that need to generate hundreds of millions just to break even?

July is very optimistic at this point.

Can drive-ins make a legitimate comeback?

It’s doubtful. Some drive-ins currently offer the only movie experience in town, and the format remains a wonderful blast from our cultural past. Still, some states (Colorado among them) aren’t allowing them to pick up the cinematic slack.

The market conditions that drove so many drive-ins out of business, like rising real estate costs, will still exist post-pandemic. The current crisis may extend the lives of select drive-ins, though, a true silver lining in the chaos.

BONUS: How will movie theaters woo customers back?

It won’t be easy. Audiences will be wary to go anywhere outside their homes for a short spell. Then, they’ll need to be convinced that the theatrical product is superior to the crush of streaming shows flowing into their home.

The hardcore movie fans will come, no questions asked.

It’ll be up to theaters to sweeten the deal initially. Why not lower prices at the concession stand, if only for a limited time. Or, the existing membership deals from AMC, Alamo Drafthouse Cinema and their competitors can slash their fees.

Ultimately, the films themselves will have the final say. If we get more “Birds of Prey” and less “Wonder Women,” the industry could be in for a protracted slump.

UPDATE: The folks at JustWatch.com shared new information about audiences returning to theaters nationwide. From the study: “The rate of Cinema-goers who want to go back to the cinema after the lockdown is about 10-20 percent lower than in other countries. Men (58 percent) and users under 25 (60 percent) are looking forward to visiting the cinema again soon the most.” 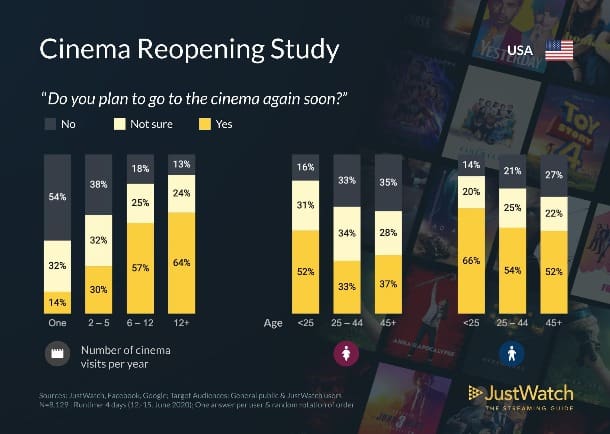