This week we learned that a documentary on disgraced politician Anthony Weiner lacks the “red meat” scenes painting Clinton’s campaign in a sour light. The filmmakers deny editing those moments out of an earlier cut of the film. The evidence appears damning.

It’s hardly the first time Hollywood rallied around Hillary. It won’t be the last.

Ellen Hearts Hillary: It’s standard practice for presidential contenders to do the talk show circuit. And it’s expected that the hosts will be courteous to their guests. As well they should. Ellen DeGeneres went a few steps further when Clinton appeared on her show earlier this month. “You know what a supporter I am. I think that you’re as smart as can be, I think you are qualified, I think you stand for everything that I want in a president,” DeGeneres told her audience.

‘Path’ Plugged: Just about every Hollywood product can be seen on DVD, Blu-ray or Video on Demand. Not the 2006 miniseries “The Path to 9/11.” A detailed look at the mistakes that led to the Sept. 11 terrorist attacks aired once on ABC, scored solid ratings and was quickly buried by ABC’s parent company, Disney. Why? Most suspect because it cast an unflattering light on President Bill Clinton’s war on terror tactics. That burial, apparently, extends to the former president’s wife. There’s still no news on when this product will be released, if ever.

Ka-Ching: This Time magazine headline says it all: “90% of Hollywood Political Donations Are Going to Clinton.”

You Go Girl TV Politicians: Is it an accident that “Madam Secretary” is on the CBS lineup? The show stars Tea Leoni as a tough female Secretary of State dealing with thorny issues each week. Plenty of ink has been spilled regarding its connection to Team Hillary. And while the direct links aren’t there, it’s hard to imagine the show’s producers didn’t hope their product had some effect on our opinion of powerful women. A Clinton video snippet inspired the show, after all. And let’s not forget the Benghazi-like episode casting Leoni’s character in a favorable light. Even The New York Times tied “Secretary” and shows like “State of Affairs” to Clinton. “[Leoni’s character] is an idealized version of Mrs. Clinton, with all the smarts and drive and none of the ambition.” 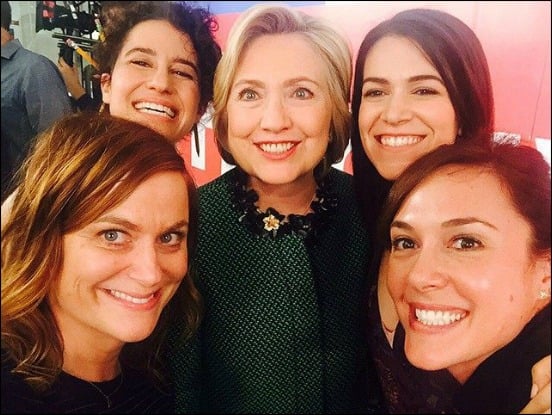 ‘Broad’ Selfie Brigade: It’s not unheard of to see a politician in a comedy series. Heck, remember Richard M. Nixon on “Laugh In?” (A casting coup helped by a Republican pal) The team behind Comedy Central’s “Broad City,” produced by Hillary devotee Amy Poehler, did more than ask the former First Lady on their show. The cast assembled for a series of set selfies and made sure social media knew all about it. Suddenly, a candidate known for her lack of warmth was suddenly all smiles next to her “new” co-stars. The caption on one snap shot hammered home the point: “Just three best friends on the set of Broad City season 3!”