You’ve got the fancy Fitbit, the Crunch gym membership and maybe even a fresh Nicotine patch to usher in 2016. That’s all well and good, but why not turn to the movies for additional help? Some stories are tailor made to sustain you at your weakest moments.

You may not keep your New Year’s resolutions all the way through  Dec. 31. The following five films will still keep you honest longer than expected.

“Fat, Sick and Nearly Dead” – This 2010 documentary lacks the high jinks of Morgan Spurlock’s more celebrated “Super-Size Me.” It proved an Internet sensation all the same, even if it feels like one long ad for a juice-heavy diet. Aussie Joe Cross is morbidly obese and suffers from a rare autoimmune disease. So he packs up a juicer and hits the road, talking to Americans about the way they eat in the process. Cross co-wrote and co-directed the film, which is inspirational on its own. Audiences may not adopt Cross’ juice diet. His ability to change his medical fortunes is inspiring all the same.

“Lbs.” – This indie sleeper motivated in two distinct ways. The film’s star and co-writer, Carmine Famiglietti, was 300 or so pounds before the film began shooting. A protracted production – two years! – allowed him to appear much thinner in the film’s second half. It’s not the usual parade of kale salads and Stairmaster sessions. The character’s transformation comes from a more holistic approach to weight loss. His tale could easily inspire others to attempt the same. Plus, Famiglietti undertook the project in order to lose weight, using his art as the motivational carrot.

“Rocky” – Yes, everyone knows the tale of Rocky Balboa is Inspiration 101. What you may not know is the story behind the film classic. Sylvester Stallone was a virtual unknown at the time, and a broke one at that. So when the film studio dangled $300,000 for his screenplay but not the starring role he gritted his teeth and said no. This was his story, and he had to star in it himself. He was right, of course, but that determination is what we all need to keep our resolutions.

Sylvester Stallone Was A "Terrible Choice" For "Rocky"
.

“The Trip”/”The Trip to Italy” – Some New Year’s Resolutions aren’t based on health or losing those saddle bags. We just want to seize the day, or at least take that memorable vacation we’ve talked about for ages. What better double feature than this British comic duo’s “Trip” series? Steve Coogan and Rob Brydon play fictional versions of themselves enjoying everything travel has to offer. Beautiful vistas. Sumptuous food. Gorgeous women. And, at times, the kind of witty repartee that can trump them all. These low-key travelogues won’t make viewers feel intimidated or pressured to tick off a dozen “must see” targets. It’s a leisurely stroll sure to send us scrambling for the best deals on Kayak.com or Orbitz.com.

“Guardians of the Galaxy” – What does the 2014 superhero smash have to do with any New Year’s resolutions? It’s simple. Formerly pudgy actor Chris Pratt got buff to play Star-Lord. That caught everyone’s attention. Now, he’s arguably the most in-demand popcorn movie star around thanks to the film, his abs and a little film called “Jurassic World.” Getting fit transformed his whole life. We may not be a Marvel superhero by the end of 2016, but Pratt’s makeover shows just how profound a fitness regimen can be with enough dedication. And sit-ups, of course. 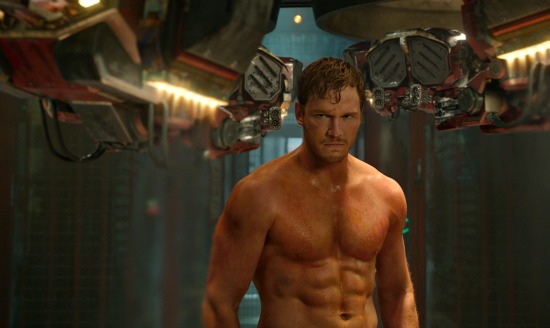