Actor Neville Archambault’s character Is sweaty, twitchy and mesmerizing. And all he does is stare at his unsuspecting tenants through a network of secret security cameras.

It’s a shame “13 Cameras” doesn’t quite know what to do with such an unnatural resource.

The horror film packs a timely fear all the same. Just who is watching us in our increasingly insecure society? It’s still a meandering affair, putting too much faith in a character’s infidelity to keep our attention.

No final act surprise can dispel our sense of disappointment.

Newlywed Ryan and Claire (P.J. McCabe and Brianne Moncrief) just moved into a new rental property, and they should be ecstatic. The home is modest but beautiful, and she’s pregnant with their first child.

Ryan’s smiles hide a festering disappointment in both impending fatherhood and his marriage. And he’s self-medicating by shtupping a gorgeous co-worker (Sarah Baldwin). 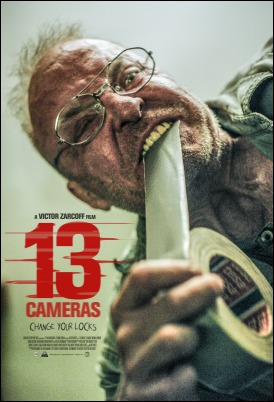 Their new landlord Gerald (Archambault) sees it all thanks to a crush of hidden cameras. Gerald spends every waking hour watching the couple, their arguments and Ryan’s secret liaisons.

Is Gerald a simple voyeur? A deeply disturbed soul craving stimulus? Or something far more sinister?

“13 Cameras” isn’t sure. And so we watch him peer into those computer screenings eager to see Gerald develop into something fascinating.

And it never happens.

Archambault’s surprising bulk and creepy gaze hook us right away, as does his gait which resembles a much older man managing back spasms.

The main couple’s marital problems provide a welcome change to the standard “lovers in trouble” template. He’s a jerk, to be blunt. She’s more concerned about decorating the nursery than what her flustered husband is going through.

It’s the kind of texture most horror films duck. The elements still don’t service the larger story as they should.

First time writer/director Victor Zarcoff’s film taps into very modern fears but can’t ratchet up the thrills when Gerald finally leaves the computer screens behind. In its favor, the film eschews bloody “kills,” keeping much of the violence off-screen or implied. The restraint is welcome, but horror fans won’t be satisfied, and others will want more dramatic meat to gnaw on.

“13 Cameras” opens with sobering stats regarding security cameras, including the claim that more than 30 million surveillance cameras have been sold in the last decade.

This film will make tenants think twice about their next rental decision. It could have left a far more intriguing pop cultural footprint if they let Gerald run wild.