Disney’s latest begins like its candy-colored predecessors. It’s quickly clear the goals extend beyond product tie-ins. The story packs a feminist punch along with a sobering message about prejudice.

It’s hardly soapbox time. “Zootopia” marries terrific character development with the embedded lessons. Stir in some singular sight gags, and you have the studio’s most challenging work in years. Maybe decades.

“Zootopia” is an animal melting plot, a Big Apple-like hub for its jungle denizens. The urban landscape welcomes gerbils, lions and foxes, all manner of beasts living in harmony.

Judy Hopps (Ginnifer Goodwin) is the newest cop walking, or rather bouncing along, the Zootopia beat. She’s the first rabbit to protect and serve, part of the city’s mammal inclusion project. No one, including Chief Bogo (Idris Elba), thinks she can handle anything but writing parking tickets.

But when animals start disappearing without a trace, she volunteers to solve the mystery. She’ll need some clues, stat, just to get things rolling. Maybe that cagey fox named Nick (Jason Bateman) can lend a hand. Or is he too busy grifting strangers to help?

Judy’s parents agree with Chief Bogo. She’s not cut out for law enforcement. Living out your dreams is so much pop culture noise.

“We gave up on our dreams and settled,” says her father. “We settled hard,” Mama Hopps adds with a grin.

That won’t stop Hopps. What could? Goodwin’s rabbit is a force of nature, but never a smarmy or off-putting one. She still meets her match, sort of, with Bateman’s foxy Nick. He’s a snake oil salesman, sure, but one just waiting for a friend to believe in him.

It’s all prime fodder for an adorable romp. And “Zootopia” is just that, even if the case in question is dramatically undercooked.

Mid-film, the story pivots to an uncomfortable conflict. Suddenly, the “harmless” predators are reverting back to their more primitive ways. That makes old, presumably buried fears bubble to the surface.

It gets more direct from here:

“We can’t let fear divide us,” one character cautions. Even Hopps starts treating those dear to her with disdain.

FAST FACT: Judy Hopps was originally created to be a cynical character. Once Ginnifer Goodwin landed the role, her take on the character coaxed the writing team to completely re-invent Hopps as a more positive, and cheerful, bunny. 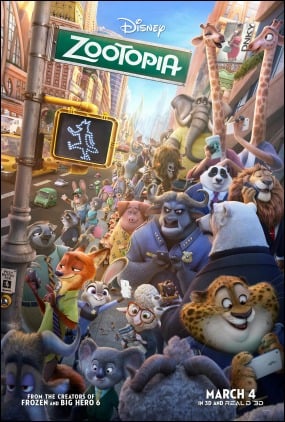 “Zootopia” deals directly with prejudice in a way that’s almost jarring within the context of an animated film. The story dances around the subject initially, firing off cutesy lines like, “Only bunnies can call each other ‘cute.'”

The mid-movie bombshell, though, strips the niceties bare. Audiences are left with the raw emotions rendered from judging people by something besides their character.

Adults can fuse the revelations to their particular ideology. Have at it. The truth, though, is that “Zootopia’s” inclusive message is deeply heartfelt and too generic to stick. Consider a potential wave of Syrian refugees entering the U.S. without firm background checks. Some fears are perfectly understandable.

And there’s something silly about a film slamming stereotypes that uses some for its biggest laughs. Take the sloths who oversee the DMV as your Exhibit A. Or making the co-lead a fox who makes a living by tricking people out of their cash.

The film’s messages wouldn’t matter without the wondrous characters bringing them to life. The Goodwin-Bateman pairing is inspired, and the smaller casting choices similarly keen. The Disney animators bring a shocking amount of detail to the scenery, but it’s dwarfed by the leads’ facial expressions. Even weak one-lingers zine when delivered with a perfectly arched eyebrow or steely squint.

“Zootopia” hits most, if not all, of the right animated notes. That it strives for something more, and nudges parents and children to hash it out on the way home, makes it shine even brighter.