That’s especially true when a film screening features an intro and post-movie Q&A with the famed “Clerks” auteur. 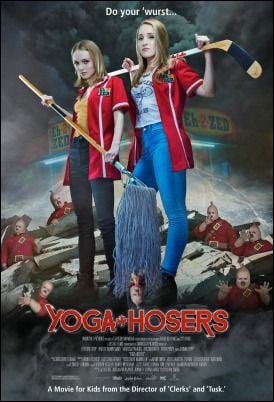 The chatty host put his latest film in context for the 1,000-plus attendees.

Smith recalled going to the movies with his father and how he later moved into his own film escapades with his daughter.

Those experiences taught him about the lack of cinema for girls. “Yoga Hosers” features actresses who do much more than just fight over boys, he said.

His daughter is one of the leads in the film along with Lily-Rose Depp (daughter of Johnny Depp, another “Hosers” co-star).

Smith described how “Hosers” came from his obsession with the scene in “Tusk” that included his Rose Depp and Harley Quinn as Canadian convenience store clerks. After piecing together the nostalgic appeal of shooting two unsatisfied youngsters sitting behind a counter,, he went to work on “Yoga Hosers.”

The director acknowledged how thrilling it was to work with his daughter. He also cherished, along with Depp, being mentors to their children on set. After relaying the story of his first meeting Depp (he referred to Depp as “Captain Jack” to which Depp replied, “Silent Bob”), Smith unveiled his film for the crowd.

It’s hard not to like “Yoga Hosers” when you have had the filmmaker himself describe to you the noble intentions behind it. It doesn’t hurt to hear two of the film’s likable actresses beforehand. It’s certainly not a movie for everybody. In fact, as divisive as Smith’s films can be, “Yoga Hosers” will no doubt be his most divisive, especially for his loyal fans.

Some will wholeheartedly endorse the idea that the “Clerks” creator has lost his mind.

RELATED: ‘Tusk’ Is the New ‘Snakes on a Plane’

The film revolves around the two Colleens – high school sophomores who man a convenience store counter. They’re invited to a senior party, one which they can’t attend because they have to work instead.

There’s also Canadian Nazis, tiny Bratwurst-style men (played by Smith) that kill in the cruelest way possible. Guy Lapointe (Depp’s character from “Tusk”) is back, too. The film is wild, over the top and kinda lovable.

Harley Quinn Smith and Lily-Rose Depp are, by far, the best thing about the campy movie. The two are as “natural” as Smith sold them during his intro. They play well off of each other and are easy to watch.

They may have been better served with a more low key, “Clerks”-style story, but clearly that’s not where Smith’s interest was after making a film about a man turning another man into a walrus.

Between @tuskthemovie & @YogaHosers, it’s clear I’m trying to get thrown out the biz. But it’s not really working… https://t.co/7YpeT6OdaT

There are dark and humorous moments in “Yoga Hosers” that shine (including a surprising bit about satanism and the signs the Colleens keep posting on the convenience store door with excuses for being closed).

There’s even some fun musical numbers with the girls and their 35-year-old drummer (Adam Brody).

Smith directs with a great and booming energy different from his previous films.

Some might not buy into the B-movie elements which include Ralph Garman doing Hollywood impressions to mask obvious exposition. Others could recoil over the film’s fight scenes complete with purposefully corny special effects.

There’s still a lot of fun to be had if you give yourself over to “Hosers.”

After the film, Smith did a Q&A where his typically long, but meat-filled answers covered over an hour of time despite only three questions being asked. One question was what DC Comics film Smith would choose to direct.

Smith gave a 40-plus minute answer on how he preferred television. He peppered the long answer with some humorous, behind the scenes anecdotes from his directing an episode of “The Flash.”

Smith also touched on how divisive “Hosers” has become with critics and his fans. Although those assembled for this screening ate it all up.

The director shared how a filmmaking friend of his named Malcolm Ingram (“Bear Nation”) described the movie as a “wet fart.” Ingram told Smith he liked the picture, but people needed to be ready for it, otherwise it fit his earlier description.

Smith laughed the criticisms off, saying he understood people loving or hating the film. In a bit of spoiler talk, he also touched on “Moose Jaws,” the final chapter to his True North Trilogy which includes “Tusk” and Hosers,”

Spoiler Alert in the next paragraph

Describing the film as “‘Jaws,’ but with a moose,” Smith acknowledged he would kill off his famous Silent Bob character in a nod to Steven Spielberg’s shark classic.

Asked how Bob would then fit into the upcoming “Mallbrats” television series and “Clerks III,” Smith revealed he would be a “Star Wars”-like force of energy that only his “hetero life-mate” Jay (Jason Mewes) can see while everyone else scratches their head.

Making sure audiences got their money’s worth, Smith fit in a full-blown rock concert after his long Q&A, the various intros to the film, and the film itself.

The Glam Skanks, whose music is included in the film, played their hearts out despite a now smaller crowd.

If there’s a proper way to see “Yoga Hosers,” then see it on the big screen when Fathom Events holds a one night screening on August 30 before the film’s theatrical premiere Sept. 2. The one-night-only screening will include Smith’s Q&A session.

Even for someone who enjoyed the film, “Yoga Hosers” is far easier to enjoy and accept when Smith himself is there to set the stage.