Then Tom Cruise declared a need for speed.

” flashed impossibly cocky pilots who made Naval Aviation cool. They got the girls, rocked the Karaoke bar and risked their lives for their country.

Reagan’s America got its movie close-up. And the U.S Military’s image enjoyed an overdue Hollywood spit shine. Real-life veterans couldn’t help but take notice. They still salute the movie all these years later.

He saw it firsthand.

“We noticed the number of women who came to the officer’s club vastly increased,” says McClinton, a warrant officer Army aviator who served three tours in Iraq.

McClinton was born in 1960. He remembers the pro-military movies of his youth. Think Rock Hudson’s “A Gathering of Eagles” and Jimmy Stewart’s “Strategic Air Command.”

“In a way, [‘Top Gun’] hearkened back to that. It’s a piece of your childhood,” McClinton says.

FAST FACT: The film hit no. 1 on the box office charts on its debut weekend, only to lose it to Sylvester Stallone’s “Cobra” one week later. The film’s staying power wouldn’t be denied. It climbed back to the number one spot four months after its release.

The warriors of “Top Gun” weren’t like those seen in other war films from the era. That heartened McClinton.

“Every soldier wasn’t committing war crimes or smoking dope. I’m not gonna say those things didn’t happen … but people who didn’t know any better see it, and that’s what they take away [from those movies],” he says. “That bugged me.”

“It was fun to see another light shined on the military,” Johnson says.

That doesn’t mean he could forgive some of the creative license employed by Cruise and co. The kind of “blatant insubordination” flashed by Maverick when he “buzzed the tower” would have grounded him immediately.

“You can understand the producers wanting to portray a free spirit and loose cannon,” Johnson says. “It would only take one incident like that and you’d be done flying.” Even the muscular moves portrayed in the film beggar belief.

“You’re not gonna role upside down and fly next to a MiG,” Johnson says.

Yet the story did capture the camaraderie of pilots, and their need to succeed, in a way veterans could appreciate.

“Everybody wants to be the best pilot … and your reputation is based on your flying abilities,” he says.

Retired Marine Dale Dye remembers how curious veterans were about the movie when it first hit theaters.

“Then the word started getting out. “You gotta see this,” says Dye, an actor and novelist who routinely serves as a military consultant on Hollywood productions like “Platoon.”

“[Director] Tony Scott spent money like a madmen to get that thing made. The Navy went along,” says Dye, who would later act with “Top Gun” star Kelly McGillis in the 2015 film “Blue.”

Naval aviation enlistment spiked after the movie’s initial release. It was pretty obvious why.

“How cool it would be to be Tom Cruise or [co-star] Val Kilmer and do all that neat stuff that very few get to do in uniform?” says Dye, whose newest novel “Havana File (The Shake Davis Series) (Volume 6)

” came out earlier this month. “It was a great boost and a great boon to naval aviation.”

Dye does note a downside from the movie’s popularity.

A few years later, more than 100 Navy and Marine aviation officers were accused of sexually assaulting women in Las Vegas during the annual Tailhook Association Symposium.

“There were all kinds of references to ‘Top Gun’ connected to that,” Dye says. “My ears pricked up at that point. Were these guys trying to emulate Cruise and Kilmer? There might be something in that.”

FAST FACT: Tom Cruise initially turned down the role of Maverick. What changed his mind? Producer Jerry Bruckheimer arranged for him to fly with the legendary Blue Angels pilots.

“It really did change the thought pattern in America. You could be in the military and be cool … be winners,” says Millett, who served in the Army and Army Reserves for 14 years.

“Top Gun” made the pilots challenging Cruise’s Maverick a nebulous enemy, but Millett says it wasn’t a mystery to movie goers.

“We all knew they were the Russians, and [Maverick and his fellow pilots] were winning,” she says.

Millett’s film festival kicks off its 10th year May 21st. She says she’d “absolutely” program “Top Gun” into the annual event had it come out today, not in 1986. The story isn’t based on actual events, but showing service members with respect is a key mission of the festival.

In a way, the film’s legacy extends well into the 21st century.

When the GI Film Festival began, its programming lineup countered a Hollywood image set by movies like “Redacted” and “In the Valley of Elah.” Those films showcased a negative look at the U.S. Military.

Now, 30 years after “Top Gun,” there’s a new wave of military-based stories hitting theaters. “American Sniper.” “Lone Survivor.” And audiences are lining up to see them. 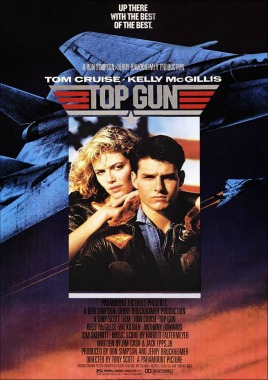 “Right now, supporting the military is a hot item. Both political parties can get around it,” she says.

“It’s kind of ageless. I know people who say, ‘let’s plug in ‘Top Gun’ and watch it.’ It has good legs,” Johnson says.

He isn’t so sure making a sequel, which both Cruise and producer Jerry Bruckheimer insist is in the works, is a good idea.

The nation is still at war in Afghanistan, and hostilities in Iraq are heating up anew.

Our nation is still threatened by terrorists who would love nothing more than to land more body blows against the United States,” Dye says.

“I think any time that a nation is threatened, and we certainly are … the public silently screams for heroes who, in the face of all that adversity and danger, emerge victorious,” Dye says.