​The best we can hope for is that the accompanying dialogue doesn’t make our teeth hurt.

This smart, sly shocker offers endearing characters, both the heroes and villains. In fact, you may wish the blood never starts flowing just to spend more time with them.

Nothing doing. “They’re Watching” is a horror movie through and through. It’s simply one that starts entertaining us long before the first knife meets skin.

“They’re Watching” begins as a spoof of HGTV’s “House Hunters International.” Becky (Brigid Brannagh) has found the home of her dreams in Moldova, a generic Eastern European town. It looks like a stiff wind could knock the structure over, and it’s located miles from anything that could even loosely be dubbed “civilization.”

The impending “flip” is played straight all the same, one of many signs the film’s creative team understands satire.

Now, it’s time to shoot the all-important “after” footage. That draws a small, squabbling film crew back to Becky’s house. Only crew members keep insulting the locals, a sketchy bunch that don’t take kind to Ugly Americans. And please don’t use the “W” word around them (“witch”).

They became unhinged. What are they so worried about? 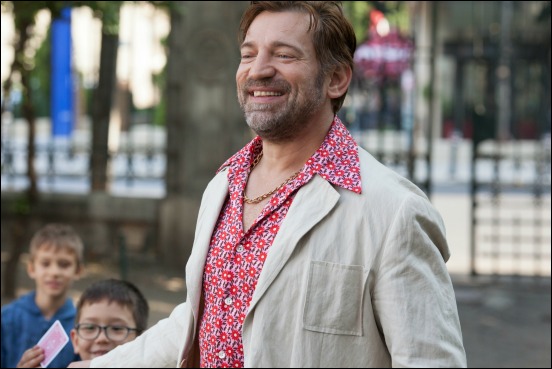 Along the way the team meets townsfolk who spend their free time giving stink eyes to strangers. Not Vladimir. He’s the town’s best (read: only) realtor. He’s pure snake oil pusher  – and Eastern European caricature. Yet he’s lovable all the same, thanks to Dimitri Diatchenko’s full-bodied turn.

Vladimir is quick with a joke and a toast. Vodka, of course.

“They’re Watching” busies itself with intergroup battles, minor flirtations and a serious power trip by the show’s on-air talent (Carrie Genzel). The crew babbles on about production minutiae that gives texture to the story.

“Do you have another knife? Big knives look threatening on TV,” someone asks Becky as she slices food for the cameras.

RELATED: Sexy Horror? This Female Fan Has the Answer

There’s a real sense of both character and their responsibilities, grounding a story that could easily slide off the rails.

The film embraces the found footage format … to a point. It plays into the story, that of a film crew documenting what it fears will be disastrous – but not for the reasons they suspect – professional moment. We still have plenty of traditionally shot film to stitch the story together. Phew.

DID YOU KNOW: HGTV’s “House Hunters” has been accused in numerous cases of bending reality to fit the show’s preconceived plot lines.

“They’re Watching” teases some thoughts above and beyond reality show theatrics. It’s about U.S. culture invading places it may not belong. And how the power of a simple camera can have a profound effect on how we see each other.

The story gets creepier with every revelation about what really haunts this Moldovian hamlet. That leads to an “Evil Dead”-style finale that’s both maniacal and a slight letdown. After so much work went into these flawed characters it’s almost a shame to see them lined up for destruction.

But hey, it’s a horror movie. And genre tropes can’t be denied. “They’re Watching” happily deconstructs so many of them, why not shrug over those it can’t help but embrace?