The “Superego” series started out as a sort of an exploration of morality by following a character who has no practical use for it.

The protagonist, Rico, is a psychopath, unable to feel anything about his actions. He also works for a vast criminal syndicate as a hit man. Thus, morality means little to him as he neither feels guilt for his actions nor 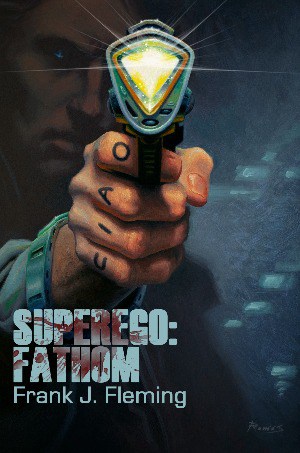 In the first book, he reaches the limit of his nihilistic philosophy when he starts to feel the life he knew collapse around him and, while being forced to pose as law enforcement, finds himself starting to care for a woman detective he is paired with.

The sequel, “Superego: Fathom,” builds on this and is sort of an exploration of heroism. Rico has the opportunity to help in the face of an intergalactic threat, but still being a psychopath, he derides no innate pleasure for helping others and is unsure where that path will take him.

In a way, the series is about finding purpose in life. Mostly, though, it’s a fun action-adventure with a lot of wisecracks.

Frank Fleming is an author, recovering pundit and senior writer with The Babylon Bee.