Does anyone know the macabre better than Stephen King?

The horror maestro’s books have been getting under our skins for decades. Few scribes have been as successful with their creepy, crawly stories.

Some inspired some of the best horror movies of their kind, including “The Shining” and “Misery.” One of 2017’s biggest hits proved to be “It,” the eagerly awaited screen adaptation of his classic 1986 tale.

Yet he’s consistently showcased a blue collar persona at odds with his nightmarish fiction. Uncle Stevie is just like you and me, you see?

That image took a hit this week, thanks to social media.

A 28-year-old man died when an Amtrak train carrying a group of roughly 100 Republicans crashed into a garbage truck. At least two others were seriously hurt in the crash.

The crash inspired King to fire off this Tweet roughly a day later. 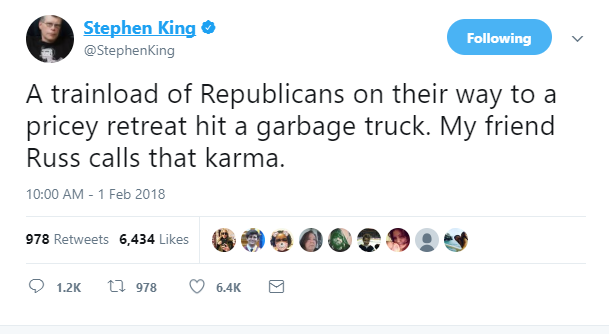 It’s unlikely any of the major entertainment sites will report on King’s distasteful Tweet. They lean as left as their news colleagues and prefer to protect liberal stars by staying silent on these matters.

Twitter users, on the other hand, fired with both barrels.

And that, ladies & gents, is beautifully emblematic of the toxic speech currently in American party politics. Does that sound like a productive conversation to build a better future? Treating political opponents as ‘enemies’ gets us nowhere. Aim for truthful dialogue.

What a scumbag you are. You write about horror but the real horror is your actual soullessness.

Your friend Russ is a childish, smug jerk.

You’ll delete this in a few hours. Quite sad that you’re so blinded by your hatred. Disappointing.

922 Retweets and 6,100 Favorites so far for a Tweet celebrating the death and despair of those who dare to share a different point of view.

The Democratic Party has fallen so far.https://t.co/Sp5OSF6PdN

A young man died in that “garbage truck”, perhaps before karma comes back to bite you in the butt, maybe you can help his young family by donating to the gofundme page that’s been set up by his company. His name is Christopher Foley of Louisa, VA

If only the truck could have killed your movie rendition of The Dark Tower.

You really wish that on someone’s family?

One young man was killed, six injured.
When did you delete your soul? https://t.co/MdrJ0Njb5u

Karma for who, the innocent truck driver who died, or his coworker in critical condition? https://t.co/ZEVGJ6LdLF

Roughly an hour later King later fired off this Tweet in response to the backlash.

UPDATE: King returned to Twitter to offer as insincere of an apology as you’re ever likely to see.

A rather thoughtless tweet from me concerning the train-truck crash, for which I apologize (if one is necessary). It should be pointed out, too, that those Republican politicians, who can be heartless when they vote, immediately got out to help.