Alternately empowering and demeaning, the Aussie thriller lets a stalker victim turn the tables on her assailant.

Or should we be more worried about him?

The story loves to keep us guessing. It’s really a one-act play gussied up as a feature film. That means the dialogue had better be razor sharp to grab our attention.

“StalkHer” gains points for both originality and two engaged lead performances. Still, it strains to say something provocative about the gender wars. It rarely succeeds.

Kaarin Fairfax stars as Emily, a single woman who notices some strange noises outside her home one night. In a flash the perpetrator is in her kitchen, expertly tied to a chair. She’s silenced him with a gag in his mouth.

He’s helpless. Only it’s not quite that simple.

Seems Jack (“Wolf Creek’s” John Jarratt) has had an eye on Emily for some time. He works with her at a local hospital. Is this an obsession gone terribly wrong? Will “StalkHer” be a replay of “Hard Candy,” another thriller with a similar power swap?

Co-directed by Fairfax and Jarratt, “StalkHer” purports to comment on how men and women connect in the 21st century. It isn’t pretty. Their conversations reveal the fractured state of gender politics. Yet their disconnect could have taken place 30 years ago as well as today.

Jack thinks women exist for one reason only – to do as he wishes. Yet there’s something about Emily that hardly gains our sympathy.

For most of its running time, “StalkHer” is a tiresome exercise in cinematic baiting. We watch Emily slash, slap and otherwise punish Jack for his misogynist ramblings. Only these attacks exist in her mind. 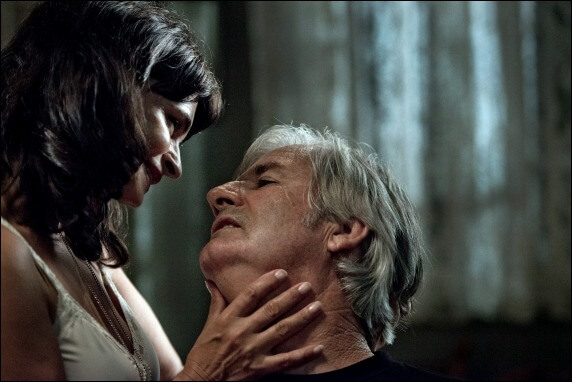 The more mysterious “StalkHer” is, the better off we all are. Once the truth trickles out, we start to unplug from the stakes at play.

Do they really represent us? Hardly. They don’t have to, assuming their banter reveals something profound about the way men and women commingle. Instead, the film takes a series of gimmicky turns, each alienating us from their fates.

FAST FACT: The modestly budgeted “StalkHer” was shot on a soundstage next to where Angelina Jolie’s $60 million directorial effort “Unbroken” filmed some sequences.

We rarely see women of a certain age portrayed in a sensual fashion. For that alone “StalkHer” deserves our respect. Fairfax can be alluring when she’s not brandishing a meat cleaver or hypodermic needle.

The actors have an undeniable chemistry, but to what end? It’s hard to buy into their connection, even as the intimacy behind their talk spikes.

Had “StalkHer” stuck to its surreal setup it might be a rewarding, albeit vacant, spin on courtship mores. As is, the fitfully slick story gives way to a knee-slapper of a resolution.

HiT or Miss: “StalkHer” might spark some post-screening debates. Those discussions will center on the current state of dating more than anything about this disappointing thriller.