Some of us like it in the dark with a bunch of strangers. Others, in bed one-on-one with an iPad or on the train with a phone. We digest our movies depending on who we’re with and where we are, much like sex. That’s why when it comes to ranking movie sex, it depends on my mood.

What turns us on is as diverse as the millions of scenes that have been penned to arouse our deepest parts. Is it the light clutch of a lock of hair circling the finger of a stranger? The butterfly wing-brush of your husband’s face on your skin? Is it panty-tearing panting? Doing it on a train with a hooker? All of these and more.

Or it’s just a bit:  Ben Affleck’s member (or penis stand-in) visible for just a sec, as he steps into the shower with a bloody, psychotic Rosamund Pike in “Gone Girl.” A boom box elevated over the head of a broken-hearted John Cusack in “Say Anything” speaks to the heart years after we’ve grown out of puppy love.  Hell, the object of desire doesn’t even have to be human to arouse. Wayne and Garth pondered the sexual appeal of Bugs when he dressed as a girl bunny. 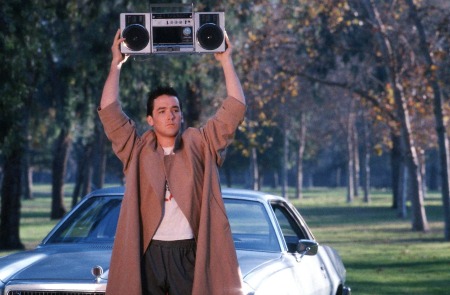 And let’s be clear. Carnal and in your face works, too. The chiseled strippers humping anything that moved in “Magic Mike” were fine by most of the libidos I know. If you’ve watched the trailer for the sequel more than once, raise your hand.

To create a list of sexy movie romances is daunting. I could say, “not tonight, I have a headache,” but I’ll rally. Valentine’s Day approaches, and what better time than now to winnow my filmic libido down to a short list.

For relaying the intoxication of arousal, these five movies do it for me (in no particular order):

Great movie sex will never replace real sex, of course, no matter what Joaquin Phoenix thinks of “Her.” But when portrayed well, it stays with you long after the credits. Like so many other roles the movies play in our lives, onscreen desire can fulfill fantasies far beyond the 50 shades of any imagination.

ALSO CHECK OUT: Sexy Movie Romances … from the Male Perspective

Jennifer Papale Rignani is currently working as a senior writer and content manager at BusinessForward, an IT consulting firm in her hometown of Pittsburgh. She has also worked as a freelance writer and reporter since 1998 and was associate editor of Pittsburgh Magazine from 2003-2005. Her articles have appeared in dozens of publications including South Jersey Magazine, Main Line Today, Patch.com, Mt. Lebanon Magazine, Edible Jersey, The Pittsburgh Post-Gazette, The Sandpaper and New Jersey Savvy Living. She is married with three young daughters. When she isn’t breaking up fights or cleaning the bathtub, she watches movies.