She burst on the scene as a Kewpie doll comic with a sailor’s salty tongue. Since then, she’s more famous for toeing the liberal line on hot button issues like abortion than sustaining that comic momentum. She starred in a meandering Comedy Central show that somehow survived three seasons. More recently, her naughty persona got hijacked by Amy Schumer via “Trainwreck.”

So it’s high time for a reinvention.

“I Smile Back” offers just such a moment. Silverman’s performance is Oscar bait through and through, but that’s hardly a critique when the subject in play demands all of an actor’s attention.

I Smile Back Official Trailer 1 (2015) - Sarah Silverman Drama HD
Silverman plays Laney, a married mother of two who seems to have it all. Successful, doting husband (Josh Charles, avoiding caricature at every turn). Healthy, happy children. A posh but not unsustainable home. Livin’ the dream, as some might say.

Only Laney can’t process suburbia’s minor irritants. She fumes when asked to park a certain way while dropping her kids off at school. When a local parent feeds her son some anti-Thanksgiving rhetoric she blows her top.

She’d rather be holed up at home, snorting cocaine or having meaningless sex with her friend’s handsome husband. She’s an addict, and all the trappings at her disposal can’t change that horrifying fact. 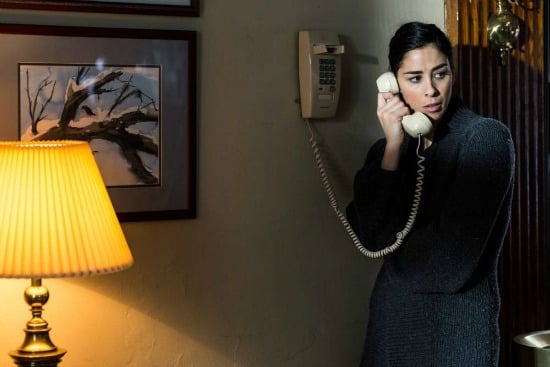 We don’t get to know much about Laney. Did she ever have a job? What, exactly, is her mental illness? What we learn are slivers of her reality, and it’s more than enough. We see similar souls in newspaper headlines, tabloid updates and, sadly, within our own families. They’re tortured by mental illness, addiction, or both, and it’s rarely a happy ending waiting to happen.

Silverman conveys that quiet agony with small, assured strokes. It’s in the fearful glance she gives her husband, the kind that shows he may slam the door on their marriage at any moment. Or when Laney succumbs to another empty sexual encounter the pleasure she feels is like a drug. It’s another momentary distraction, the kind she needs to survive another day.

It’s almost torturous to watch Laney’s marriage take hit after hit. There’s love between them, no doubt. Can that sustain their bond, especially with her knack for capsizing their most tender moments?

“I Smile Back” wraps in a tight 85 minutes, and you know from the opening moments we won’t see any cookie-cutter resolutions. That’s the point. It’s rare to see a film capture addiction’s reality with the purity “Smile” delivers.

DID YOU KNOW: Co-screenwriter Paige Dylan is the daughter-in-law of Bob Dylan, who is name checked briefly in the film when a character mentions music icons from Minnesota.