“It wasn’t really part of my goal growing up,” says Lindsey, who recently co-starred in the 2015 football drama “Concussion.”

“Auditioning is like playing the lottery. You put in your time. It’s a war of attrition,” Lindsey says. In between, she took acting classes and worked, but it still left some hours she could use productively. And it’s easier to get the gig if you’ve written the gig in question.

“I wanna act. And writing is a way for me to act,” she says.

It’s a thriller at its core, but the film’s finely developed romance showcases Lindsey’s knack for psychological portraits.

From Class to the Big Screen

“My mother was a firm believer in education,” Lindsey says, even though she caught the acting bug early. That didn’t dissuade her mother. “You can be an actress, but you’re going to have a degree,” Mom insisted.

The budding thespian agreed. She has no regrets. Theatrical classes strengthened her work ethic, gave her friends she still networks with today and mimicked the long hours a movie set demands.

It helped that she spent part of her senior year shooting the J.J. Abrams thriller “Super 8.” That “teeny little part” earned her a SAG Card. It also gave her a glimpse of her future. She followed up her “Super 8” stint with performances in “Jack Reacher,” “Promised Land” and “Won’t Back Down.”

A New Kind of Thriller

With “Blue Jay,” Lindsey took a classic movie trope and gave it a fresh spin. The main couple in the film is far from perfect. Heck, they’re just getting to know each other.

“We wanted to capture that,” she says. It helped that the production hired Wade, whose background 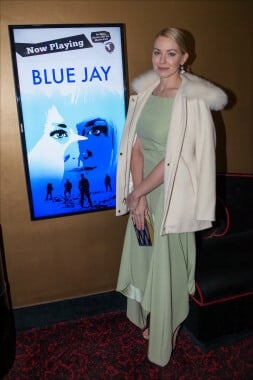 as a Marine added an extra layer to the budding romance.

“He has this gusto, a go get ‘em attitude. It played a little differently to how we wrote it,” she says.

Lindsey co-wrote “Blue Jay” with the film’s director (and her husband, Michael Ciulla). The pair shared their script with colleagues for feedback during the production process. As a first-time director, Ciulla was particularly open to wisdom from others.

Some of the advice didn’t make it into the final cut.

“It was challenging to not put boobs in the movie,” she says, a recommendation she heard more than once. Her network suggested she go topless during the film (she doesn’t). Lindsey, who minored in Gender Studies at CMU, saw the hypocrisy.

No one asked for the male star to flash his buttocks, she says.

Lindsey may be a young actress, but she’s already worked with some of film’s biggest talents in the industry. Take Will Smith, her “Concussion” co-star.

“It’s new for him every single time, 100 percent new,” she says of how the actor approached each take. “[Frances McDormand from ‘Promised Land’] is able to be so relaxed and present. She’s completely there with you … there’s nothing else in her world than what’s happening right now. I’m trying to incorporate that into my work.”

Lindsay’s latest project hardly fits in any existing mold. The closest film might be “Boyhood,” a story captured over a 12-year shooting cycle.

Her new project, which she co-wrote once more, is a relationship story featuring a couple pondering the next big step in their courtship.

“Should they get married or break up?” she asks. “It’s what a lot of couples in their late 20s to early 30s are going through. It’s this gray area.”

To answer that pivotal question, Lindsey and the untitled film’s crew are shooting one weekend a month over a year-long period.

She isn’t sure if the finished tale will yield a feature film or an episodic show. Either way, she’s writing the next chapter in her career on her own terms.