After all, in today’s Hollywood even accountants kick butt between crunching numbers. So why isn’t Langdon’s return in the third “Da Vinci Code” thriller a bigger deal?

For starters, there’s nary a whiff of controversy about “Inferno,” the third film based on Dan Brown’s bestselling novels. Catholics won’t be up in arms about the story. Only those who rightly believe the fears of an overpopulated planet are hooey will raise a stink.

It’s been seven years since “Angels & Demons” reached theaters, taking in a modest $133 million in the process.

And the new story, while sound on paper, lacks the urgency of the best potboilers. Good thing Tom Hanks is on hand. If you’re banking on an Everyman to save the day, there’s simply no one better to punch that particular clock.

Hanks plays crafty symbologist Robert Langdon once more, only he’s in terrible shape when the movie opens. Robert suffered a serious head trauma right before the film opens. Within minutes, his life is in jeopardy from a ferocious female assassin.

Enter Dr. Sienna Brooks (future “Rogue One” star Felicity Jones). She not only nurses Robert back to a semblance of health but helps him piece together why he’s under attack.

Seems a lunatic named Zobrist recently left a plague sample so deadly it could wipe out half the planet. It’s the only way to save our congested planet, he warned.

Now, Langdon must find the container before someone pulls out the cork. But who?

Good thing Robert remains a whiz at problem solving, even in his weakened state. Zobrist, who dies dramatically in the film’s prologue, left behind just the right number of clues to give Robert and Sienna some hope. 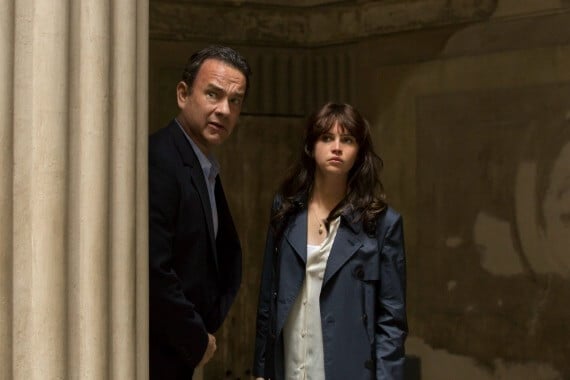 Robert and the good doctor must dodge that assassin as well as a mysterious businessman (Irrfan Khan, stealing every scene) with murky connections to the pathogen.

Director Ron Howard could deliver this kind of highly polished thriller in his sleep. So “Inferno” looks like a crackerjack thriller, down to the chic European locales. It’s still bogged down by reams of exposition and a false sense of urgency.

We may have clutched our La-Z Boys when Jack Bauer screeched, “we have no time!” on Fox’s “24.” The same approach simply doesn’t work here. The story is too protracted, the stakes somehow aren’t as frightening as they should every right be.

It’s hardly Hanks’ fault. He’s as convincing as ever playing a brainiac cracking another code. And his chemistry with Jones is just right, especially since the story avoids any flirtations between them. That’s left to another, older character (Sidse Babett Knudsen) with boasts a curious history with our hero.

Their bond might be the best reason to explore another Langdon-based feature.

As is, though, “Inferno” feels far more obligatory than impassioned.

HiT or Miss: “Inferno” lines up all the necessary ingredients for a first rate thriller, yet it’s only marginally diverting despite a solid cast.

When was the last time a movie romance gave us a collective lump in the throat?

It’s been a while, right?

Hollywood’s idea of romance these days is “friends with benefits,” angry gender battles and, most unfortunately, films featuring Kate Hudson.

It’s why “New Life” deserves huzzahs for simply having two people fall in love sans gimmicks. It’s a heartfelt ode to marriage, commitment and the harsh realities that sometimes come our way.

It’s also saddled with long stretches without a whiff of dramatic tension or texture. That leaves too much of its running time lacking a reason to fall for this heartfelt tearjerker.

Ben and Ava met when they were just children. They clicked all the same, and as the years passed their bond became more than friendly.

Their courtship had its bumps, but deep down they just knew they belonged together. Rather than a happily ever after ending, though, a cold truth awaits them. That tests more than their marriage. It threatens to change they way they view life, their faith and more.

“New Life” captures their struggles with an honesty that’s missing in other parts of the story. It’s wonderful to see a couple clicking, but scene after scene of marital bliss is, dare we say, dull? A richer script would find the humor, the struggles and the tiny joys in the day-to-day flow of a successful marriage.

FAST FACT Erin Bethea grew up the daughter of a pastor.

Even the very best marriages have their tense moments. Misunderstandings are impossible to avoid, but navigating them can bond two people together in ways sheer bliss often can’t.

Had “New Life” included a morsel of those moments the darker sequences would have been even more riveting.

Jonathan Patrick Moore and Erin Bethea have fine chemistry as the loving couple. Their bond feels real, never forced, and it’s impossible not to cheer them on through the pain. We’ll even forgive the film’s use of narration, which naturally isn’t needed but doesn’t damage the narrative beyond repair.

A subplot involving Ava’s good chum is anything but organic, though, and we later learn why. The film’s final twist is hopelessly contrived, a screenwriter’s sloppy attempt at closure.

“New Life” falls ever so gently into the faith-based film category, but its spiritual underpinnings are artfully arranged. Watching a family hold hands before eating dinner offers a potent show of faith in hard circumstances.

HiT or Miss: “New Life” isn’t perfect, but those starved for true romance will grab the nearest box of tissues and wait for the next lump in the throat moment.