In that moment of storytelling, I had a realization. It was so profoundly personal for me that I began to scribble notes on a half-damp napkin. I kept writing for the rest of the evening, realizing that my own struggle with identity was not unique.

What I thought was so personal and unique to my situation was, in fact, something everyone at the table could relate to at their core. That night, something profound happened. My sense of self, my understanding of who I am and where I fit in the world shifted.

I knew this realization would completely change things for me forever. Amidst hearing how Eduardo became Eddie, how Roberto became Robert and how loud everyone laughed when people around the table started doing impressions of how their native Spanish speaking parents say certain words like “Es-preh-way,” I realized, I was not alone.

But more than that, I realized that none of us were.

I had spent years of my life feeling like an outsider looking in, never quite feeling American enough or Puerto Rican enough. In an instant, I realized that none of it was personal. The feeling of relief was indescribable. In the next moment, all I wanted to do was share this realization with as many people as I could.

What if I could replicate this experience for other people like me all across America. I could be a catalyst in the community and provide relief from the angst so many of us feel. On the way home, with napkin notes overflowing from my purse, I made a personal declaration to get the word out about this in a documentary. 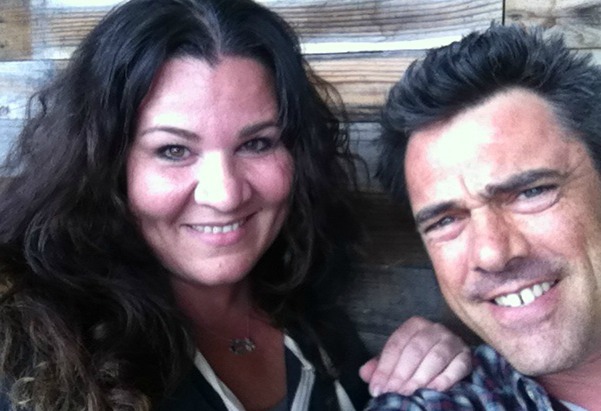 In January of 2012, I finally found the courage, and the phone number, to pitch the “Project Enye (ñ)” documentary concept to veteran documentary filmmaker, and Academy Award nominee, Henry Ansbacher. Henry was immediately drawn in by the concept and spontaneously began sharing stories of his own father’s experience growing up as a first-generation American in a German/Jewish immigrant household. His response further reinforced my belief that I was really on to something.

Right there in front of me was a non-Latino man who felt closer to his own father because I had the courage to share my story about being an “Enye (ñ).” I wondered what would be possible if I could get others to share their stories? How could the subsequent connections make a difference for those who took time to listen and contribute?

I never tire of hearing what we call “Enye (ñ) Stories.” In fact, I’m energized and honored by the candid sharing. Today, we’ve only just begun: we have so much ground to cover, so many people to meet and so many stories to share. I want everyone to see what I see and hear what I hear so they might have a transformative experience like I did that summer night in Miami.

I believe in the power of these stories because I believe that in moments of real connection, the barriers that divide us become invisible or even dissolve completely. What’s left is only humanity, and in the little corner of the world that I inhabit, this means something, something about me doing my part.

By nature I am a bit impatient, and the traditional path Henry described to get from a strong concept to a finished film in a theater would take longer than I could bare. Why not just release stories in real time? I knew things were changing radically in the content distribution world and why couldn’t “Enye (ñ)” be at the forefront of that change. Why not deliberately position “Project Enye (ñ)” at the horizon of what’s exciting and new in content creation today?

So we made a deliberate choice  to join the ranks of a small number of film projects like “Veronica Mars” and Junto Box Films who embrace a new direction in filmmaking that borrows fundamental community building strategies to create content that the “crowd” actually wants. It really turns the traditional content creation model on its head.

We have chosen to embrace this bold, new content creation strategy and are encouraged at every turn that we are onto something big. We are innovating a way to close the Latino media gap and are a living, breathing example of creating a format where anyone can be a contributor.

“Project Enye” will screen at 4:45 p.m. Sept. 28 at the SIE Film Center in Denver as oart of the four-day CineLatino Festival. The Denver Film Society event, which begins on Sept. 25 with “Water & Power” by director Richard Montoya, celebrates the accomplishments of Latinos in film. Other films screening in the festival include ‘Food Chains,’ ‘Heli,’ ‘Frontera‘ and ‘Who Is Dayani Cristal?’

Denise Soler Cox is a successful business entrepreneur and motivational youth speaker turned film director. Fueled by her own identity crisis as a female Latina born to Puerto Rican parents growing up in New York during the 1970’s, Soler Cox struggled to fit into her surroundings. Straddling two cultures – the Puerto Rican lifestyle at home and the American dream beyond those four walls, Soler Cox experienced firsthand the challenges, compromises and inequalities that many sons and daughters of Spanish-speaking immigrants go through every day.

In 2012, Soler Cox connected with Henry Ansbacher, a Denver-based Emmy-winning and Academy Award-nominated filmmaker, and together they are giving this cultural issue an international stage through “Project Enye (ñ).” “Project Enye (ñ)” is a cultural movement afoot in Denver, Colo., that uses first-hand and authentic stories to cultivate a sense of identity and belonging among this first-born American generation. In 2014, Soler Cox and Ansbacher took “Project Enye (ñ)” online launching the first community-powered, media-rich site where “Enyes (ñ)” worldwide can post or view inspiring and generation-specific stories with others. Projectenye.com will serve as an everlasting online memoir for this generation and a casting tool for the project’s film and unscripted TV show debuting in late 2015.