If the title of Andrew Pessin’s latest novel, “Nevergreen,” sounds familiar … it should.

The author and academic watched with horror as Professor Bret Weinstein fled the bucolic grounds of Evergreen State College in Olympia, Wash. in 2017. Weinstein, a biology professor and liberal in good standing, disagreed with a campus-wide day without white people protest.

He subsequently got chased off campus.

Pessin’s “Nevergreen” doesn’t follow that incident’s narrative, but the two share similar DNA. The book introduces us to J., a physician invited to speak at a remote college so woke they can’t serve coffee and academic titles have been banished.

Except when they aren’t.

What happens next is a prickly dissection of modern university mores. It’s identity politics on steroids, a campus where the draconian rules seem to change by the hour.

And poor J. gets the brunt of that reality.

Pessin says he’s been tracking the rise of woke culture on campuses for some time now. The farcical incidents tend to “blur into each other,” he says, even if many events fall under the culture’s radar. 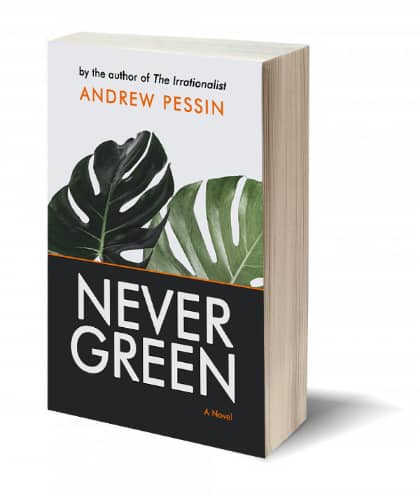 Not the Weinstein imbroglio. That incident got serious press coverage along with a closeup in the 2019 documentary “No Safe Spaces.”

“That’s the moment I realized I really wanna write about this,” Pessin says.

Today’s campus dwellers often want the best for society, hoping to eliminate hate, bigotry and other societal ills. What too often happens, the author notes, is that passion overwhelms the practitioners.

Suddenly, even liberal “allies” are considered the enemy if they deviate ever so slightly from the woke playbook … as Weinstein did.

“Eventually the revolution eats its own,” says Pessin, who had his own brush with Cancel Culture in 2015 when his Facebook post denouncing Gaza resurfaced without the vital context.

Weinstein’s plight summed up the current college mania as well as any confrontation could, something “Nevergreen” pounces on with a surgeon’s delicacy. You may need to read it twice to absorb the novel’s full satirical heft.

“Satire is such an interesting genre,” he says, noting the fine line between reality and exaggeration. It’s one the modern university makes a chore, given the idiosyncrasies on display nationwide.

“Comedy must have a kernel of truth to be effective. That’s even doubly so with satire,” he adds.

Conservatives typically rage the loudest against the current campus culture, but “Nevergreen” offers a few morsels for left-of-center readers, too.

The book, Pessin notes, is “against people who have gone off the deep end,” regardless of their ideological base.

“Nevergreen” is meant to both entertain and embolden readers against those eager to limit the First Amendment. Pessin emerges from the project fearful of what could happen if cooler heads don’t prevail, and fast.

“I do fear this is the trajectory, when people are motivated by passion and anger and they lose control,” he says. Campus radicalism is hardly new, but what’s different now is how those radical went to “eliminate” dissent from the campus square.

He fears what may happen if the woke revolution continues unchecked.

“The movement is becoming unhinged,” he says. “To be unhinged is to become mad. Physical violence is the next step.”

Pessin has heard from some fellow academics who similarly fear the new woke bylaws.  Those same souls, though, are afraid to share their views publicly for fear of reprisal.

He hopes “Nevergreen” encourages them to break their silence.

“Right now, the crazies are the loudest. They come across disproportionately represented,” he says. “They can be resisted if we motivate the silent majority of reasonable people.”

Photo by MD Duran on Unsplash