Netflix’s “Mascots” is the latest mockumentary from the genre’s founding father, Christopher Guest. What sounds like the proverbial slam dunk somehow hits the rim and bounces out of bounds.

The man behind “A Mighty Wind,” “Waiting for Guffman” and “Best in Show” can’t find the funny in people wearing fluffy suits?

We’re at the World Mascot Association’s annual competition in Anaheim, Calif. The celebrated event pits grown men and women prancing around in oversized costumes against each other. Contestants have come from across the globe – even England! – to participate.

Tom Bennett co-stars as a British football mascot hounded by a family legacy. He’s a third generation mascot, and daddy doesn’t always approve of his innovations.

Zach Woods and Sarah Baker play a mascot couple that can’t stop bickering. And The Fist (Chris O’Dowd) takes his gig as a hockey mascot a mite too seriously. In the mascot realm he’s the enforcer, and he’s got enough lifetime bans to prove it.

Who will win the coveted Golden Fluffy? Does anyone care? Guest sure doesn’t.

The director is wildly disinterested in plot, dramatic conflict and other story essentials. It’s like he wanted to see his old chums again (Jane Lynch! Fred Willard!) and staged a film to make the reunion happen. Even Guest’s “return” as Corky St. Clair from “Waiting for Guffman” isn’t worth the reveal.

He’s funny, as always, but it’s a glorified cameo. 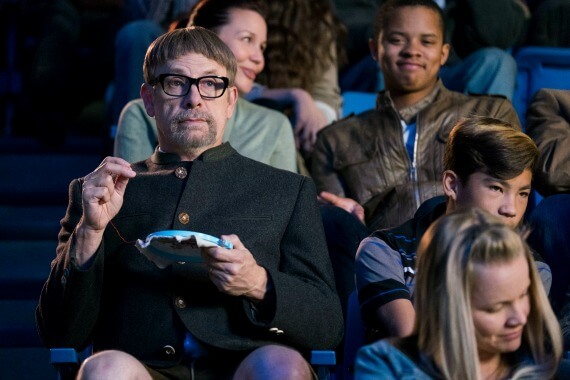 “Mascots” follows the exact blueprint of previous Guest romps. A large cast filled with mostly familiar faces. We hear, not see, the great Harry Shearer but miss Eugene Levy and Catherine O’Hara. The style is droll to the Nth degree, and rigorously condescending.

FAST FACT: Jamie Lee Curtis was 25 when she saw a picture of Christopher Guest in Rolling Stone magazine. She didn’t know the “This Is Spinal Tap” star, but she told her friend, “I’m gonna marry that guy,” pointing to Guest’s picture. She was right. They’ve been married since 1984.

The film’s potential life saver? The mascots performances come two thirds into the movie, promising the kind of physical shtick that could yield serious laughs. Not quite. One performance is consistently charming. The rest feel like mediocre acts that deserve a hasty gong.

The key players have little love for their subjects. Many professional mascots are terrific athletes. Some are expert physical comedians. Here, they deserve every ounce of mockery headed their way.

“Mascots” sneaks in a few zingers all the same. A series of scented cups, like bruschetta flavored, help keep the mascots from suffering groin injuries.

Two of the dopier mascots, played by Parkey Posey and Susan Yeagley, serve up a few snort-worthy lines.

“We’re sisters. Our chemicals are the same,” Yeagley’s character says.

And an anatomically correct donkey mascot is as funny as it sounds.

The comedy’s only bow to modern times is a bit involving those PC handcuffs. A mascot for The Leaping Squaws runs afoul of Native American stereotypes.

Not bad, but that’s as deep as the satire cuts.

Some story threads are introduced with little payoff.  The show may be telecast by the Gluten-Free Network, but the concept doesn’t yield a smart running gag. Neither does an affair depicted mid-movie.

“Mascots” wraps early, leaving enough room for an epilogue showing how little affection Guest and co. have for the material.

Here’s an idea for Guest’s next film – a mockumentary about talented stars going through the motions to mock Middle America.

HiT or Miss: Christopher Guest’s legacy won’t be dinged by ‘Mascots,’ nor will the strained mockumentary add to his comic legend.