The “usual gang of idiots” were ready to mock the potential president regardless of party, politics or racial makeup. It’s simply what Mad magazine has done for decades, above and beyond its fold-ins, Don Martin gags and movie parodies – poke fun at politicians from both sides of the aisle.

HollywoodInToto.com checked in with Mad magazine’s Editor-in-Chief John Ficarra to explore the outlet’s approach to political humor, how the web impacted its approach and what Afred E. Neuman has in store for 2016’s presidential contenders.

HiT: We’re inundated with political humor these days, from “The Daily Show” to our snark-filled Twitter feeds. Where do you see Mad magazine within that spectrum?

John Ficarra: With “The Daily Show,” Bill Maher and now John Oliver, it’s a great time for political comedy. But because we’re the only remaining print comedy outlet, Mad is an odd fish. Actually, we’re just odd, forget the fish part. Mad has no political agenda and has always never trusted politicians or anyone in authority. I think that philosophy has served us well. 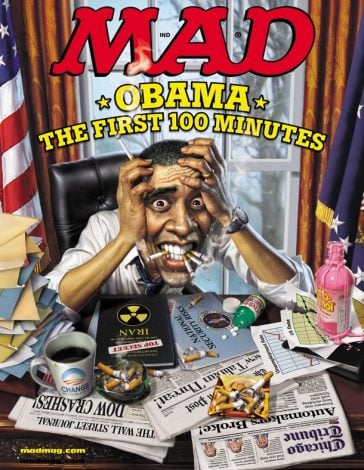 John Ficarra: Never! In fact one of my all-time favorite Mad articles is “The Lighter Side of the Smoot Hawley Tariff Act.” We never write down to our readers. We assume that if we know about a political issue and can write something funny about it, that it’s likely our readers will know about it, too – though it’s much less likely that they’ll find what we write about it funny.

HiT: My observation is that political comedians/institutions haven’t been nearly as hard on Obama/Biden as past presidential duos. Agree? Disagree? Why?

John Ficarra: That hasn’t been true for Mad. We’ve been as tough on Obama as we were on Bush and Clinton. We depicted him as Alfred on our cover with the line “Yes We Can’t” before he was elected. We also did a great movie poster – “The 46-Year-Old Political Virgin” – on his lack of experience. Some comedians may have gone easy on Obama at first because he was likable. But that ended pretty quickly. A few years into his first term we sensed that some of the bloom was off the rose and we ran our “I Loved Obama” cover, which struck a chord, especially with conservatives.

We did a mountain of material on Clinton, but most of it was all Monica jokes and fat Bubba jokes. With Bush we spoofed his general idiocy and the rush to war in Iraq.

One thing about the far right: whenever there is a Democrat in the White House, they never fail to over reach and set themselves up as targets of humor. “The Clintons killed Vince Foster”. “Obama faked his birth certificate and is really a Muslim”. With outlandish claims like that it’s almost like they’re begging us to go after them.

HiT: Mad typically won’t pull punches regardless of the White House occupant. From an editorial perspective how do you achieve and maintain that? 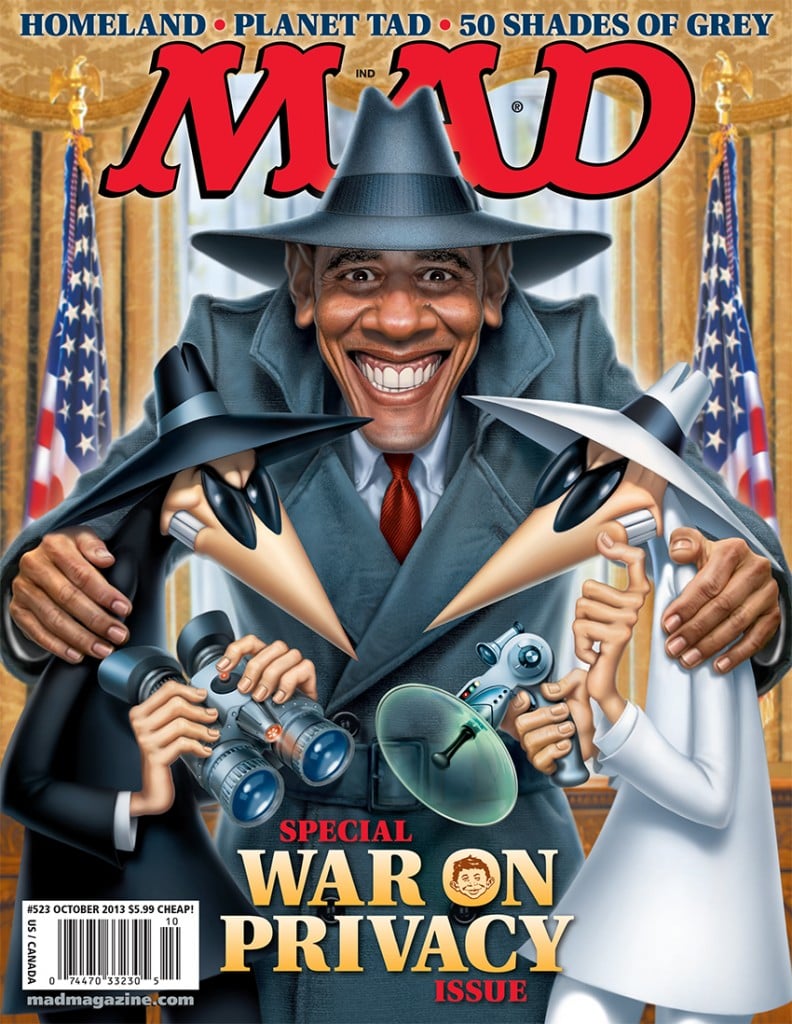 John Ficarra: As I said earlier, but I doubt you were paying attention, Mad has no political agenda. So, with every new President we wipe the slate clean and wait for him – or perhaps the next time, her – to do something stupid. Historically that occurs sometime between the swearing in ceremony and the end of the inaugural ball. Unlike other times in this interview, when I am exaggerating for comedic effect, that is not the case here.

HiT: Some would argue political humor packs a greater punch today than it ever did before. Witness the cultural impact of Tina Fey’s Sarah Palin impression, a bit magnified by the news media and social media. Do you agree that political humor has more impact today?

John Ficarra: I think most political comedy exaggerates but ultimately reinforces the existing public perception of a politician. The public already had doubts about Sarah Palin’s intellectual depth long before Tina Fey delivered the knockout punch. If “SNL: did a sketch about Obama’s intellect my guess is it would die an ugly death. But a sketch about his disengaged aloofness, I think, would do very well. Unfortunately for politicians, once the jokes start, the comedy quicksand spreads very quickly and is almost impossible to escape.

HiT: Considering Mad’s rich satirical history, how do you think the average Mad issue today compares to 10, 20 years ago, politically speaking? Does the online component impact how the print publication covers a given issue?

John Ficarra: We do much more political humor in Mad today than in previous years. There’s no question our daily blog, madmagazine.com, allows us to spoof political events that in years past might have been too fleeting to cover in the magazine. From a comedy writing standpoint, our blog has been great. Also, politics is now covered in the media the way only baseball used to be covered – daily, hour-by-hour updates on who’s winning, who’s losing, who’s hitting, who’s on the bench and who’s most likely to make it to the World Series. There seems to be more of a public appetite for it than ever before. We try to satisfy some of that appetite both with the blog and the print edition of Mad.

HiT; What comic themes do you expect to explore in the 2016 presidential election?

John Ficarra: When it comes to providing subject matter for comedy, the Clintons are funny money in the bank. It’s already started with Hillary, the State Department emails and her recent fun and spontaneous news conference. It will only get better. On the Republican side, with so many candidates, there is an embarrassment of comedy riches. And I’m not just talking Chris Christie fat jokes here, though we do have a file started.

MAD #532 is on newsstands now and available via iPad. The next issue of Mad, out April 21, will be guest edited by musical satirist and comedian “Weird Al” Yankovic.