The creator of Society-Reviews.com knows his commentary ruffles some feathers.

Jacob Smith is a libertarian, and he views Hollywood product from a right-of-center prism. He’s also keen for as many people to read his reviews as possible, so he often double posts them on his web site and the popular film destination Letterboxd.

That caused problems for him earlier this year when Letterboxd found his review of “Queen and Slim” problematic. The response was swift and punishing. The site’s moderators wiped his reviews from the platform.

Smith, who is black, returned to the web site, posting more reviews since the incident. This month, the site took issue with another of his critiques.

The newest incident involves “Unpregnant,” a pro-abortion road comedy starring Haley Lu Richardson. The HBO Max original follows her character as she unites with an unlikely ally (Barbie Ferreira) to get an abortion.

Smith smashed the film in his official Society-Reviews.com article.

A film that solely exists as a response to the recent wave of ‘Heartbeat bills’ in Midwest and Southern states that ban abortion after the heartbeat of a child is detected.

The review technically recommends the movie, mostly because he says it reveals the truth about the pro-choice movement. Smith tried sharing it over at Letterboxd, but it didn’t live long on the site. Letterboxd “moderators” removed the review.

So Smith posted it again. The same thing happened. 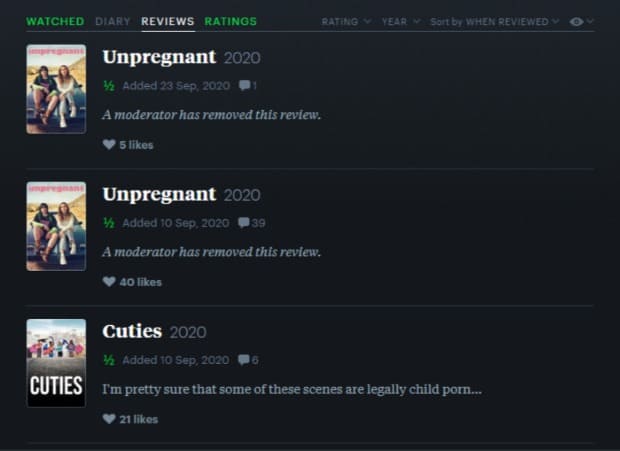 Smith’s review is aggressive, no doubt. Many modern reviews take a similar approach but from a liberal perspective.

HiT reached out to Smith for comment on the matter.

[The original review] got a lot of feedback and likes and then without warning, it was deleted by a mod. I reposted the exact same review two weeks later and that was taken down in a matter of days and no one had even commented on it. At first, I thought the lefty users reported my review into oblivion, but when it was deleted the second time with little interaction, it’s clear the mods are censoring any negative reviews of the movie to protect the agenda of abortion.

I then left a third and much more fiery review calling out the fact that they keep censoring my stuff.

For context, here is the official Letterboxd “About Us” description.

Letterboxd is a global social network for grass-roots film discussion and discovery. Use it as a diary to record and share your opinion about films as you watch them, or just to keep track of films you’ve seen in the past. Showcase your favorites on your profile page. Rate, review and tag films as you add them. Find and follow your friends to see what they’re enjoying. Keep a watchlist of films you’d like to see, and create lists/collections on any given topic. We’ve been described as “like GoodReads for movies”.

The site reserves the right to remove content it finds inappropriate. The list reads like the standard woke agenda, although it doesn’t appear Smith was told why his review got deleted twice.

The pro-life movie “Unplanned” got temporarily suspended by Twitter during the film’s opening weekend. Google dubbed the same film “propaganda” briefly before getting caught.

The digital realm isn’t kind to conservatives. Smith found that out the hard way once more.