HiT reached out to Klavan about his newest release, the third chapter in his young adult series “MindWar.” Game Over (The MindWar Trilogy)

” finds the franchise’s reluctant hero, Rick, in a final match against the digital terrorist known as Kurodar.

HiT: Is your approach to a young adult novel dramatically different to fiction you write for a mass (older) audience? 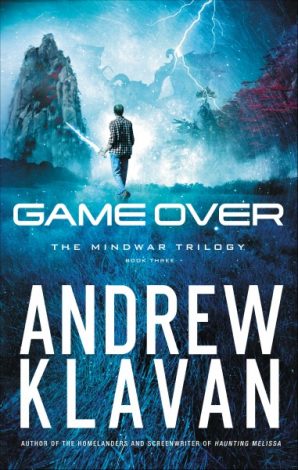 Andrew Klavan: No, not at all really. Whatever character you’re writing, you have to put yourself into his or her mindset. The biggest stretch is probably across the sexes, writing as a woman if you’re a man or vice versa, but writing as a younger person isn’t much of a stretch at all. I’ve actually been younger, hard as it may be to believe, and I can capture that pretty easily as I work.

HiT: When you’re writing a series like “MindWar” there’s always the chance reader feedback will reach you before you create the final installment. Do you block that out and stick to your instincts, or does it gently shape the characters and events in the later chapters?

Klavan: Great question. I can’t remember a time I ever changed course because of a reader’s suggestion, but I’m not strictly against it. I’d do it if the suggestion was powerful enough.

HiT: We’re living in the age of the anti-hero, but the early feedback on “Game Over” finds readers applauding Rick’s conviction and faith. Is that a reaction to modern culture, or simply where you thought his character should go?

Klavan: I’ve written so many anti-heroes. When I look at the corrupt cops and mobsters on TV now, I’m, like, “Dude, I was writing those characters 10 and 15 years ago, and they’re just catching up. I’ve kind of moved on from that and have been trying to rediscover the essence of decency and goodness, what those look like in the modern world and in the fallen world.

HiT: Why do you think anti-heroes are so in vogue?

Klavan: At first, I think it was because they were different. Now I think it’s because they’re the same. What I mean is: artists always want to try new things, new perspectives, and after years of square jawed heroes and heroines, it seemed original and realistic to focus on people with more flaws and peccadilloes. Then, when that worked commercially, the powers-that-be wanted more and more of it. And now, for me, it’s getting a bit old. Listen, my characters are always going to be flawed because people are always flawed, but lately I have been working with more characters who have a moral code and strive to stick to it.

HiT: We often hear about teens who retreat into video games in a socially unacceptable way. Rick’s embrace of technology comes after a crippling accident, and he uses it for heroic purposes. Does the duality of high tech intrigue you as a storyteller?

Klavan: Well, just to be precise, Rick starts playing video games to escape depression — and then is forced to use his skill for heroic purposes. But in this, as in most things, I think the moral difference lies in purpose and self-control. Well-used, and used sparingly, video games are fun and involving and even allow you to practice and experience the basics of heroism. Over-used, they become an escape from reality. The ‘MindWar’ trilogy deals with the games from both sides.

HiT: Young adult often is a code word these days for dystopian? Why? What does it say about today’s teens?

Klavan: Dystopian fiction is always a good way to explore big moral questions — just the sort of thing that young adults are beginning to work out. But I’m not sure the popularity of the genre doesn’t also have to do with the chaos of today’s families. Divorces, both parents working, parents sharing their uncertainty and confusion with kids just when kids need to feel the parents are powerful and secure — these things may well have created a sense in today’s teenagers that the world is somehow out of joint and that they are up against sinister power structures and principalities that they have to face alone.

HiT: Do you get feedback from parents of teens who have gotten hooked on your young adult stories? Any consistent themes?

Klavan: The feedback I get repeatedly — and it’s gratifying beyond my ability to say — is from the parent of a boy who has never wanted to read before but has really gotten into my books. Not hard to see why. An awful lot of YA fiction is geared toward girls. That’s where the readership is; that’s where the money is. But in keeping with my lifelong habit of swimming upstream, I write stories I think boys will like too: lots of action, danger, heroism and the kinds of moral choices that can get a fellow killed if you get them wrong. Girls seem to really enjoy the books, but boys are, like, “Wow! Where has this been all my life?” Like I say, it’s gratifying.

HiT: Your other writing examines both the political and pop culture realm. What impact do you suspect the latter will have on the 2016 elections … and in what form?

Klavan: For the last 50 years or so, the pop culture has been so one-sided as to amount to a kind of propaganda machine. Whatever the latest left wing hobbyhorse is — gay marriage, transgenderism, abortion, Islamophobia-phobia, now gun control — the entertainment media seem to rush to push it down people’s throats, and there’s a serious media effort to silence and attack anyone who puts forward a different point of view. Right now, in this election, people seem utterly sick of it. They seem willing to vote for anyone who will hurl political correctness back into the media’s teeth. I’m not sure that’s the best way to make the decision but, frankly, I can’t blame them.

HiT: Are there any of your existing literary franchises you hope to extend down the short road?

Klavan: I’m very fond of my latest novel for adults, Werewolf Cop. I wish I hadn’t gone quite so ironic with the title, but the book itself is one of my best. I’d love to develop it into a trilogy. But first I’ll have to find the time.