The 1988 graphic novel is a classic. It’s stood the test of time as arguably Batman and the Joker’s best and darkest tale.

It should go without saying the book is miles ahead of the film.

For anyone interested in this R-rated “Killing Joke,” I suggest picking up the book first. It’s a quick read that provides memorable moments between Batman and The Joker.

The film is a relatively faithful adaptation. The biggest addition is a 30-minute prologue with a story involving Batgirl that is not in Moore’s original version.

The inclusion of this Batgirl story is well intentioned, but it holds “The Killing Joke” back. Instead of being a maniacal ride through Moore’s tale, the story is essentially split in two. One mediocre, lazily written Batman and Batgirl story is combined with arguably the best Joker performances ever committed to film.

Moore’s short, hard-hitting story spawned controversy related to Barbara Gordon’s Batgirl. Her role in the book is that of a simple victim. She’s crippled by the Joker and humiliated. She’s like too many women in storytelling. She exists to motivate the male characters.

Barbara Gordon’s unfortunate role can be chalked up to a short page count and need to keep the story moving. That didn’t stop comic fans and feminists alike from deriding the source material.

Even the reclusive Moore has expressed displeasure with his own storyline.

If anything, it will only anger them.

The film’s first 30 minutes consists of Batgirl and Batman chasing a spoiled mafioso nephew. The scenes have their moments, but Batgirl/Barbara Gordon’s mostly pines for Batman while whining about her relationship status. 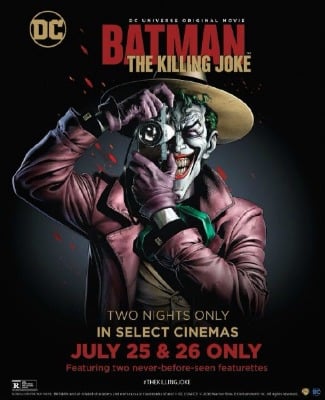 Out of all the potential Barbara Gordon stories out there, it’s certainly not the best one Azzarello could have picked.

The sex scene between the two crime fighters earned snickers from the opening night crowd.

Gordon’s expanded role isn’t bad because it’s offensive and borderline sexist. It simply pails compared to the brilliant beats later in the film.

“The Killing Joke” section is everything a comic book fan could want. Faithful in all the right ways, it examines the relationship between two veteran characters.

The story is simple, as it should be: the Joker escapes prison and is on the loose wreaking havoc. Batman is in hot pursuit.

However, it’s Moore’s themes that elevated the book, and they work in a similar fashion here. We get glimpses into the Joker’s origin as well as a glimpse into his chaotic mind.

Kevin Conroy’s Batman and Hamill perform perfectly in their roles. Both have long voiced the characters in various incarnations, most famously in the popular ’90s cartoon, “Batman: The Animated Series.”

DID YOU KNOW: Mark Hamill says The Joker was the one villainous voice he wasn’t interested in doing when first pursuing “Batman: The Animated Series.”

The highlight of the film should come as no surprise. With wonderful dialogue and layered actions, Hamill provides one of the best performances as The Joker. His Joker is reason enough to sit through the film’s clumsy opening.

He chews the wonderful dialogue with his gleefully anarchic voice. It’s thrilling as well as terrifying. There’s even a great musical number “Joke” fans will enjoy.

The animation is as crisp as we’ve come to expect from Warner Animation. Some sections are visually magnificent, and the action plays surprisingly well. The film also gets the final scene right, which is not only the most important scene in the book, but one of the most powerful scenes ever written between Batman and The Joker.

The Fathom Events showing includes an introduction, a special feature interview with Hamill about his history with the Joker and an exclusive look at the film’s score following the feature.

“Batman: The Killing Joke” will be shown July 26 through Fathom Events before hitting home video Aug. 2.