Torch carriers like Quentin Tarantino find themselves beating the drum for a genre that gave us silent heroes, open American plains and the bloody consequences of six shooters and man’s inhumanity to man. 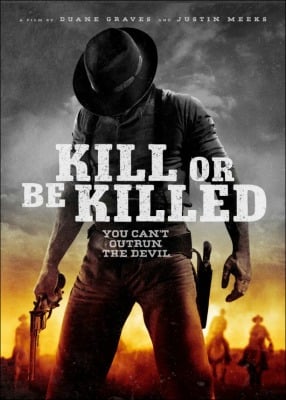 It’s not always high-profile types like Tarantino piercing the genre’s rib cage with “Pulp Fiction”-like adrenaline. Low-budget westerns have been quietly making their way onto home video and the endless browser pages of Amazon and iTunes.

Some of those western indies, like “Bone Tomahawk,” have served as fantastic new takes on the genre. Others attempted to revive old glory, like the Scott Eastwood vehicle “Diablo” from earlier this year.

“Kill or Be Killed

” revels in a genre it knows is from another time. Not nearly as ambitious as “Tomahawk” or even “Diablo,” “Killed” exists as little more than a love letter to the spaghetti western genre. That’s not a slight, yet it’s not a ringing endorsement, either.

“Kill or Be Killed” has everything a typical western road trip movie needs. There’s a prison break, a mysterious killer, a hidden treasure, evil lawmen and plenty of other excursions previous westerns have mined so well.

Kill or Be Killed: OFFICIAL TRAILER

The movie follows Claude “Sweet Tooth” Barbee (Justin Meeks) and his gang of outlaw misfits as they make a trek to recover a retirement-sized score. Along the way, they run into every one of the aforementioned western tropes, the kind littering the video collections of Tarantino and other genre lovers.

While “Kill or Be Killed” contains all the elements of a great western, it shows its limitations more than most. “Bone Tomahawk” was a great example of a western with an incredibly limited budget that found unique ways to still seem big in scope.

“Kill or Be Killed,” on the other hand, has an ambition that outweighs what ends up on screen. It’s noticeably missing the pizzazz and talent that have gone into previous indie westerns. That being said, it’s not an entirely wasteful affair.

FAST FACT: “The Wild Man of the Navidad,” the first film co-directed by Justin Meeks and Duane Graves, had a $7,000 budget.

“Kill or Be Killed” has something in common with many of the low rent, but still lovable, western riffs from decades past. It has heart, and a lot of it.

Occasionally finding the right balance in tone, between tongue in cheek homages and bloody quick bits of action, “Kill or Be Killed” delivers some fun. It’s easy to occasionally crack a smile since it’s clear the cast and crew have a soft spot for the genre. They’re doing their best to honor it.

Meeks, who co-wrote and directed “Killed” with Duane Graves, lack the visual knack of a Tarantino or the storytelling chops of “Bone Tomahawk’s” S. Craig Zahler. They still have a clear understanding of the best pieces of the western genre.

In another decade, “Kill or Be Killed” would have been a Blockbuster exclusive rental gobbled up by college kids and film buffs looking for a late-night fix. Or, it might have had a limited run at those grindhouse theaters where they don’t clean the floors and the seat cushions are never sewn right.

Limited in many ways, “Kill or Be Killed” is still a heartfelt love letter to the spaghetti western that genre fans can enjoy with modest expectations. Think “Jonah Hex” but with more grit and genuine respect for a genre that keeps on trucking like a zombie extra slipping through the cracks on “The Walking Dead.”

The DVD of “Kill or Be Killed

” contains special features including deleted scenes, commentary from the directors and a “making of” feature delving into the inner workings of making a true indie western.