… which happens nightly, and Trump isn’t even president yet.

And when a celebrity says something mildly offensive, or offensive to those with wafer-thin skin, those same reporters pounce. Just ask Steve Martin, who committed the ghastly crime of saying Carrie Fisher was both gorgeous and smart.

So isn’t it peculiar that major media outlets are ignoring one of Hollywood’s biggest directors and his nonstop hate against the GOP? Of course, the last three words in the previous sentence say it all. They also explain why public trust in the media continues to crater.

FAST FACT: Only 32 percent of Americans say they have either a “great deal” or “fair amount” of trust in the mainstream press reportage according to a Sept. 2016 Gallup poll.

Violence solves nothing. I want a rhino to fuck @SpeakerRyan to death with its horn because it’s FUNNY, not because he’s a #GOPmurderbro

Funny, right? Not really. It’s more like the kind of vitriol folks on the Left and Right should condemn. Conservatives did that instantly. Sites like Breitbart.com, Fox News and Newsbusters took Whedon to task for the Tweet.

That was before Whedon insinuated Trump was a Nazi.

Nasty business, and certainly news worthy. Not only is Whedon one of Hollywood’s biggest directors, he tried to sway the election late last year with a series of “Save the Day” celebrity PSAs.

So where are the reporters covering this story? A quick Google News search yesterday revealed this 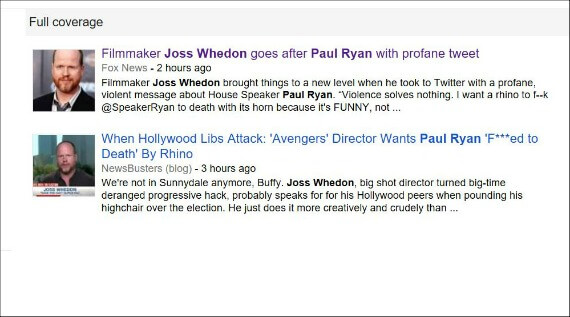 So what did The Hollywood Reporter cover yesterday instead? An Asian-American actor recoiling over a mild barb from comic Steve Harvey. TheWrap.com decided to share an actor trolling superhero actors. Not to be outdone, Deadline.com reported this:

Must we bother wondering what the reaction would be if a conservative director (say, Mel Gibson) had joked about a rhino f***ing President Barack Obama or Rep. Nancy Pelosi?

This is hardly the first time this media bias has flared surrounding the current GOP speaker. Actor Jason Biggs served up sexually gross jokes aimed at the wives of Mitt Romney and Ryan during the heat of the 2012 presidential election.

The media yawned back then. It’s yawning again.

And roughly half the nation wonders why reporters can’t treat Republicans with the same dignity they reserve for Democrats.