The story of the last abortion clinic in Mississippi captures the angst, the racial tension and the hypocrisies roiling in this southern community.

Yet filmmaker Maisie Crow isn’t content with that. She stuffs her documentary with talking point atop talking point. The film stops cold at these moments, letting Crow’s biases bubble right to the surface.

It does her project, and the genuine injustices it covers, a disservice. 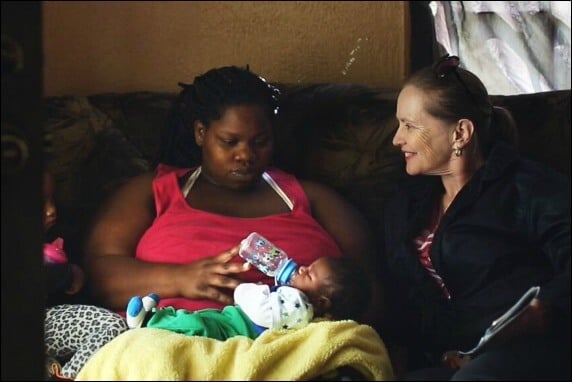 The documentary follows a Jackson, Miss. abortion clinic under constant pressure from local Christians. The faithful stand outside the building, waving angry placards and warning that Jesus does not take kindly to the death of innocent babies.

Rain or shine they come, trying to convince patients to keep their fetuses. Inside, a doctor and his small staff perform abortions and simultaneously counter the Christian narrative.

So does the film.

“Disregard those people out there … they know nothing about your life … this is health care,” the clinic physician says.

More Than They Can Handle

These patients, we’re told, are overwhelmed at the notion of becoming a mamma. In the case of April, mothering a fifth child could cripple her slim chances for happiness.

The father of April’s children is wholly checked out of his responsibilities. She doesn’t have her GED and works odd hours at the local Walmart to feed her family.

She also has a big, unbound heart. Her young children adore her. As well they should.

“Jackson” focuses extensively on April, a woman caught between two communities. She knows how hard it will be to add a fifth child to her family. She’s also sympathetic to the church’s arguments against taking an unborn life.

Crow’s crew gives us an unvarnished look at April’s daily routine, often using unflattering camera angles to capture it all. It’s impossible not to weep for her struggles.

Much is left out from “Jackson,” and not unexpectedly so. We only see one Christian’s attempt to help out April and her family. Is there no other charitable giving in this Christian community?

The notion of adoption is barely mentioned, and when brought up it’s quickly dismissed as a possible solution. Nor do we see much attention paid to women who regret their abortions.

We’re also given news snippets from MSNBC, quotes from the Rev. Al Sharpton, and footage from an ABC news special on the clinic in question. The doctor also brings up the Taliban – a clumsy attempt to equate the anti-abortion forces with Afghanistan’s monstrous tribalism?

At one point we watch pro-abortion activists getting their pictures taken after a legislative victory. How does that survive the editing process?

We also hear some damning quotes from the Christians on the front lines.

“The real issue with abortion is our immorality, our sexual immorality,” one Christian leader explains.

Even more disturbing? The disconnect between the mostly white Christians and the mostly black clinic patients. The middle class congregations rail against abortion from their suburban cocoon while impoverished young mothers wonder how they’ll take care of their babies.

All the while “self control” is the glib answer given to women facing potentially life-altering choices.

There’s an amazing exchange late in the film featuring a clinic worker speaking with a woman at a local Little League game. Turns out the woman works for a pro-life group. Their exchange is kind and open. They don’t fight or scream but find common ground where they can.

It’s a glimmer of hope in a community that could use some. The sequence also shows the power of documentary filmmaking when agendas are gently set aside.

HiT or Miss: “Jackson” captures some salient points about the abortion battle raging in the South. In doing so it caters to the pro-choice crowd’s talking points far too often.

“Jackson” plays at 6:45 pm Nov. 6 at the Sie FilmCenter as part of the 39th Denver Film Festival.