Steve Coogan stars as a Rush Limbaugh type whose world is overturned when his mixed-race niece enters his life.

What follows is predictable for anyone expecting a hit piece on the talk radio landscape. It’s worse than that, though.

“Hot Air” suggests conservative “hate speech” doesn’t belong on the air waves, and Republicans deserve to be chased out of public places.

Coogan plays Lionel Macomb, a syndicated talker facing a career crisis. His protege (Skylar Astin) is gaining on him via a soft, fuzzy and hopelessly blank brand of conservatism. Lionel isn’t sure how to fight back after 20 years at the top of the heap.

His insular life gets a Polaroid shake when Tess (Taylor Russell) comes calling. She’s his ne-er do well sister’s kid, and the 16-year-old desperately needs a place to crash.

And crash she does at Lionel’s opulent pad, even if he’d rather chase her back into the cold. You see he’s distant, angry and, well, every other cliche you could summon about a conservative.

And then some. Even Robby the Robot has more soul than Lionel.

Director Frank Coraci, moving on from a series of Adam Sandler hits (“The Waterboy,” “The Wedding Singer”), finds little of visual interest in the world of talk radio. To be fair, Coraci is trapped by a script eager to settle scores, not make us care about the main character.

Russell, a charming screen presence, is Mary Sue’d here. So is Neve Campbell, relegated to the frustrated girlfriend routine. What’s a smart, caring knockout doing with Lionel? The movie can’t explain it, nor does it try.

RELATED: Chrissie Hynde on Her Father: He Loved Rush Limbaugh

The screenplay, when it stops reminding us of how creepy Lionel is, bashes conservative talk radio fans. They’re angry, furious and bitter … did we mention they’re angry?

Because the script sure does … a lot.

“You’ve done well for yourself telling other people how to think,” someone says to Lionel, suggesting Limbaugh’s “ditto heads” don’t have minds of their own and await their ideological marching orders.

If you actually listen to syndicated talkers like Limbaugh, Dennis Prager, Hugh Hewitt and others, it’s not all about anger. Each brings a sense of humor to their platforms, a willingness to break down arcane issues beyond what most news outlets allow.

That element won’t be found in “Hot Air,” written with little insight into the modern radio landscape. It’s worth noting that talkers who wallow in rage, like the late Morton Downey, Jr., have remarkably short shelf lives.

The most disturbing sequence in “Hot Air” has little to do with the anemic story. Lionel, his galpal and Tess get chased out of an outdoor theater venue by patrons who despise Lionel’s show.

The next scenes attempt to rationalize a very real, and very disturbing, trend among Leftists. It’s a spin on, “punch a Nazi and, by the way, everyone who disagrees with me is a Nazi.” 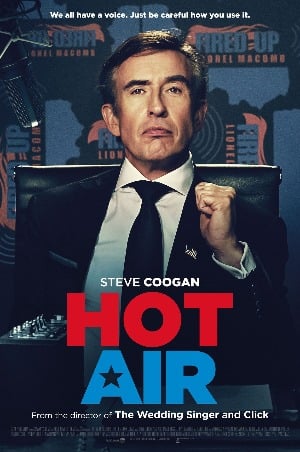 Even the film’s tag line suggests a chill on free speech.

“We all have a voice. Just be careful how you use it.”

Oh, like calling immigration detention centers “concentration camps” and the leader of the free world “Hitler?”

Coogan, flat-out brilliant in last year’s “Stan and Ollie,” can only do so much with Lionel. His character arc isn’t given much attention, to be blunt. The focus is on Tess and her immediate future.

There’s nothing wrong with giving a supporting player so much affirmation. More movies should try it.

It’s still odd to see the main character treated as an afterthought, or a punching bag in the case of Lionel.

The film’s one-sheet hints at the true purpose behind “Hot Air.”

Will [Lionel] open himself up to a new kind of responsibility and connection? Or will he stay his fiery course, burning anyone who gets too close?

The not-so-subtle message. Conservative talkers are doing it wrong and hurting the nation in the process.

The film even makes a hero, of sorts, out of a hard-left protester whose rallying cry is “talks’s not cheap. It’s toxic.” Did you ever imagine a feature film would rally around a speech-snuffing sentiment like that?

HiT or Miss: “Hot Air” is a wannabe expose of conservative talk radio that hasn’t the first clue what makes the format tick.