Baldwin flirted with A-list status thanks to “The Hunt for Red October,” but his follow up movies – like “The Shadow” and “The Marrying Man” – forced him to consider other options. His combustible off-screen theatrics surely didn’t help.

That’s a shame, since perhaps his least populist film, “Miami Blues,” gave us the best proof he could have been a major star.

The film, from writer/director George Armitage, let Baldwin flash a dangerous brand of sex appeal – and a hirsute style that hearkened back in the 1970s.

“Blues” follows an ex-con named Junior (Baldwin) whose bid for a fresh start begins with a series of petty crimes.

He steals a suitcase, breaks the finger of an intrusive Hare Krishna devotee and orders a prostitute up to his hotel room. It’s dumb luck the man with the broken finger dies of shock, but his room service prostitute (Jennifer Jason Leigh) gives him a loyal love interest.

Junior’s activities catch the attention of a bedraggled detective named Hoke Moseley (Fred Ward) who makes it his mission to bring Junior to justice – and retrieve his stolen dentures.

But first he’ll share a pork chop dinner with him. 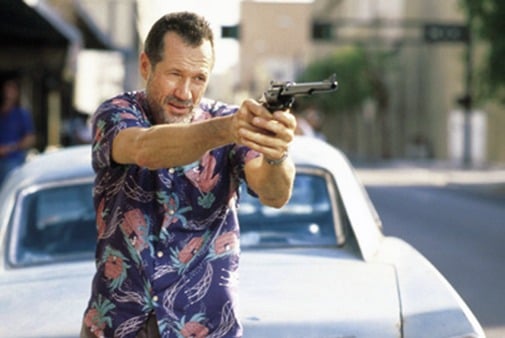 Suffice to say Junior isn’t a gentle soul. He’s prone to bending people’s bones in the wrong direction and harbors no remorse for anything he does – except when it comes to his new squeeze.

“Miami Blues” doesn’t have much of a narrative beyond Junior’s downward spiral. The Miami setting gives color to a story already brimming with texture, and Armitage’s screenplay wisely includes some biting humor.

Armitage takes pains to mix up his shots, extolling in the power of Junior unhinged mind one moment, then slowing things done to reveal his shattered psyche. Consider a smart, early sequence using a hand-held camera to capture the tenderness – and fragility – of Junior seducing Susie.

Baldwin, his voice a register or two higher than his “30 Rock” line readings, is all coiled energy here. He’s as cool as Ward is disheveled, and their cat and mouse chase is one we haven’t seen before. Or since.

Leigh turns prostitute clichés on their head, and while she’s dim enough to buy Junior’s shpiel she never loses sight of her real goal – a honest life.

“Miami Blues” may have been too dark, too scattered for mainstream success, but that shouldn’t stop consumers from giving it a fresh look.

DID YOU KNOW: Author Charles Willeford wrote a series of novels based on unlikely hero Hoke Moseley. Two years after Willeford’s death Hoke made his big screen debut in “Miami Blues.”