It’s a blessing to settle into your favorite recliner and watch “The Dark Knight.”

All the hype fades when the Joker drops his first victim. That the victim is one of his own henchman says plenty about what’s to come. Director Christopher Nolan quickly puts us on edge, and we stay there for two and a half blissful hours.

“The Dark Knight” is bolder, smarter, more authentically entertaining than its predecessor. It remains the gold standard to which other superhero films must be compared.

It’s nearly everything you hope for from the franchise, an imperfect but still dizzying ride that goes on and on … and yet you never want it to end. When a film offers this much intelligence, character development and plain ol’ spectacle, why would you?

“The Dark Knight” builds off of “Batman Begins,” a solid albeit overhyped 2005 film that brought Batman back from the cinematic grave known as “Batman and Robin.”.

“Knight” opens with a bank heist, a spare setup that delivers jolts all the same. Nothing about “The Dark Knight” will be ordinary, or forgettable.

The Joker (more on Ledger’s performance later) is behind the heist, but it’s only a warning shot. He’s trying to band Gotham City’s criminal element together to squash the Batman (Christian Bale). This Dark Knight threatens to put them all out of work.

The Caped Crusader has his own issues above and beyond the Joker. Copy cat Batmen are swarming the city, trying to fight crime just like their hero – and getting killed in the process. And Bruce Wayne, Batman’s day persona, still pines for Rachel (Maggie Gyllenhaal, an upgrade from Katie Holmes).

What follows is an epic crime story that twists and turns without betraying its inner logic or our attention span. Not that Nolan skimps on the superhero staples. “The Dark Knight” serves up plenty of “wow” moments, an increasingly difficult feat given the current state of superhero films. 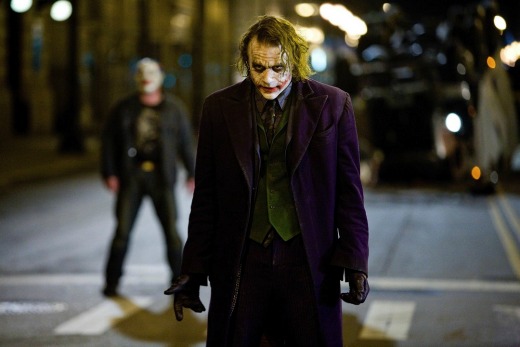 Heath Ledger won a posthumous Oscar for his thrilling turn as The Joker in “The Dark Knight.”

“Knight” masterfully weaves in modern metaphors without sacrificing storytelling or tension. Batman’s quest to rid the city of crime evokes thoughts of our War on Terror. The screenplay, co-written by Nolan, lights these political brush fires so expertly you won’t complain whether you put scare quotes around this War or not.

The voice of reason remains Alfred (Michael Caine) whose screen time may be limited but his voice echoes throughout the production. Alfred knows just what to tell his conflicted master whenever the Joker strikes.

Ledger’s Joker puts Alfred’s wisdom to the test. He’s the ultimate anarchist, but with the brains to pull off one atrocity atop another – how he manages to do it all is the film’s biggest weakness.

The character’s similarities to modern terrorists are far from accidental. Joker even sends out videos of his victims, bound and forced to read his insane manifestos.

Ledger’s final performance is everything you expected. He’s a deranged soul, a sociopath with his own insidious code of honor. Ledger’s performance doesn’t start and stop with his hideous visage, a greasepaint nightmare. Every gesture, every quirk is part of his vile portrait.

Eckhart’s performance is a flat-out bonus, and the film’s biggest surprise. He’s a square jawed superhero without a cape, the White Knight the public trusts far more than his Dark companion.

RELATED: Revealed: The Most Personal Batman Story Ever

Every supporting player gets his chance to shine. Morgan Freeman returns as Bruce Wayne’s gadget guru, and his presence affords the story some comic levity as well as its moral core. And Gary Oldman’s role as Jim Gordon is expanded here, justifiably so.

Bale’s uniformly strong performance is an afterthought, something we come to expect from the actor – and the young franchise.

“The Dark Knight” lives up to every ounce of the hype – it’s the best superhero movie to date, the new benchmark for reality-based treatments of pulp heroes. 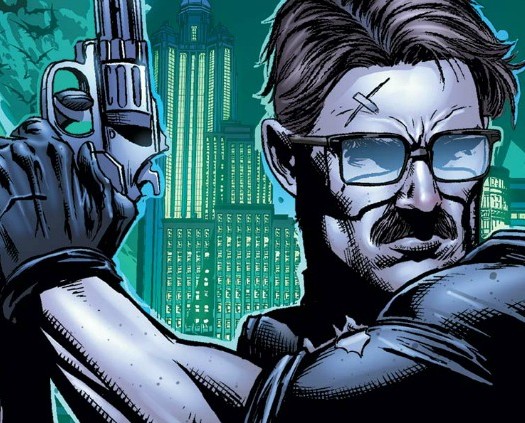 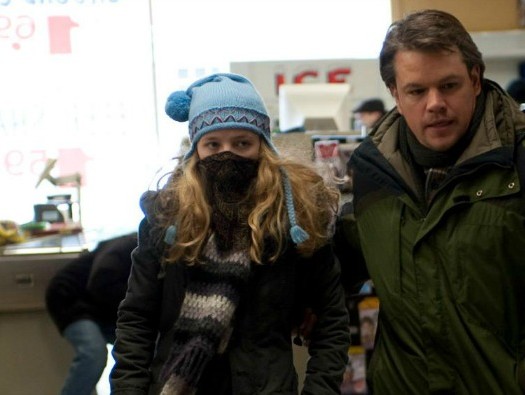