It’s easy to absorb the awfulness of 1997’s “Batman and Robin” and know why a reboot had to happen. The signs of franchise decay were obvious two years earlier, even if “Batman Forever” married Tim Burton’s vision with Joel Schumacher’s less coherent one.

In the 1990s, superheroes didn’t have to be gritty, reality-based affairs. Comic books inspired larger than life tales teeming with quips and outlandish villains – without apology.

So “Batman and Robin” must be taken on its own terms. From that perspective, the third film in the original Bat-saga offers solid action, a giddy villain and a workman-like turn from a “one and done” Bruce Wayne. 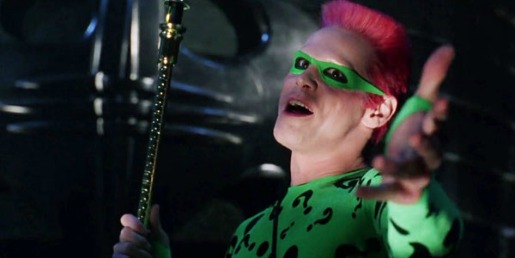 “Forever” pits Batman against a pair of snarling villains – Two Face (Tommy Lee Jones) and The Riddler (Jim Carrey). The star power doesn’t stop there, as a young Nicole Kidman plays the film’s love interest, one of those blandly realized roles meant to supply a romantic subplot, not robust character development.

Kilmer’s Batman also gets his appropriate sidekick in the form of Chris O’Donnell, bursting with “screw you, man” attitude as Robin.

Burton’s 1989 “Batman” brimmed with dark flourishes, from the sinister Joker (Jack Nicholson) to a hero who tells his would-be girlfriend to “shut up.” By 1995, the franchise’s rough edges were smoothed away for mass consumption, leaving audiences with a mouthful of cotton candy excess.

The “Beetlejuice” director, for all of his storytelling shortcomings, knows how to create a realm all its own. “Batman Forever” drifts away from that panorama, injecting day-glo colors over Burton’s existing canvas. The result is just plain ugly.

Val Kilmer is perfectly acceptable in and out of the cowl. His facial structure, with lips as distinct as any male actor’s from that era, captures the Dark Knight’s lurking sexuality. And his all-business demeanor grounds a story dripping with excess.

How else to describe an unhinged Carrey in the role he was born to play before the superhero genre shifted under his feet? Carrey is twisted and comical, prancing across the stage as if Schumacher simply invited him onto the set, gave him a tub of Twizzlers candy and said, “… go.”

Jones is far less fun, riffing on a generic madman without putting a stamp on the performance.

For every inspired moment in “Batman Forever” comes another that lands with a clank. Using the ’60s Robin costume for the acrobatic Grayson clan’s garb is genius. Having O’Donnell squeeze out a “holy fill-in-the-blank” joke late in the movie shows how lost the franchise appears.

“Batman Forever” should be viewed like a time capsule snapshot, a moment when the genre wasn’t sure where to head next. Today’s superhero films apparently cracked that code, given the booming box office results. Back in 1995, this Bat sequel was probably the best audiences could expect.

DID YOU KNOW: Val Kilmer described being in the bat suit as “psychedelic” to a crowd of comic book fans. “The suit takes an hour to get into, and you can’t do it by yourself, and then you can’t hear because there are really no earholes in it. Also you can’t turn your head and you can’t go to the bathroom by yourself.”