Why did he quit? Did he really say “no mas” (Duran denies it)? Could he have rallied to beat Sugar Ray Leonard in that epic rematch had he kept on fighting?

Those mysteries aren’t cracked in “Hands of Stone.”

The Duran biopic, starring Edgar Ramirez as the Panamanian boxer, does more than keep that mystery under wraps. It never lets us get to know Duran himself.

His trainer, played by an invigorated Robert De Niro, is another matter. And even though Usher Raymond has marginal screen time, his take on Leonard lingers far beyond the title character.

“Stone” starts with a young Duran, a boy caught up in his native land’s turmoil. The battle over the Panama Canal is featured prominently, as is Duran’s hardscrabble roots.

He’s a fighter no matter his size. And, as he grows, that tenacity would transform him into the embodiment of his country’s dreams. It’s when he reluctantly teams with a retired trainer, Ray Arcel (De Niro), that Duran’s legendary career soars.

Yes, Ray is an American and Duran seethes over that country’s treatment of his native land. The two strike up a friendship all the same, one tested time and again both inside and out of the ring.

It’s not wholly fair to blame Ramirez for our disconnect with Duran throughout “Hands of Stone.”

The screenplay too often skimps on character details, the kind that might make this colorful figure pop off the screen. This Duran sulks, and rages, and reconnects with his loyal bride (Ana de Armas).

It’s a surface-level assessment. That reveals itself when the big Duran/Leonard match begins and you’re rooting for the guy who isn’t referred to in the film’s title. 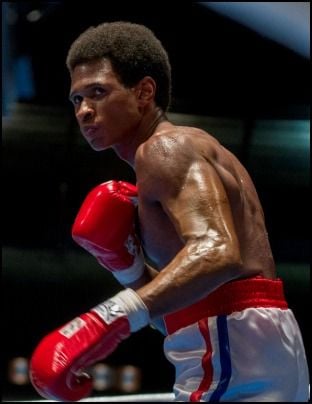 Or maybe Raymond’s Leonard is just too charismatic for his own good. The R&B star looks uncannily like the boxing great, and he captures his blend of arrogance and, well, sugar. That cocktail helped forged his bankable persona.

The cinematography is flashy, never dull, but the epic fights lack the grandeur of past boxing movies. We’re also inundated with reaction shots, the kind that at this point should be outlawed or at least severely restricted.

The film’s period details feel right, even if the disco deep dive arrives with too much vigor.

De Niro, his signature hair pushed back and whitened, looks decidedly frail. It’s a far cry from his screen image, and the current De Niro who looks so robust at 73.

That doesn’t diminish the fire that, thankfully, still rages within.

Sure, Ray is a stock character – the wizened soul in the corner urging his boxer to victory. The actor makes him an original all the same, pouncing on Ray’s fealty to his flawed fighter.

Perhaps the film is hampered by some cold truths.

Duran really did quit on that fight. He wasn’t an angel, or a role model, for much of his life. His Robin Hood predilections were a small part of his portrait. And the real Duran fought, and fought, long past his skills’ expiration date.

The film hints at what made Duran such a formidable boxer, but it can’t fully capture his unique skills set. The rage and intensity are there, though, and Ramirez channels both when it counts.

As it is, “Hands of Stone” makes the case for another film, one focusing on either Arcel or Leonard. That’s hardly what you expect from a biopic based on one of boxing’s biggest stars.