“Guardians of the Galaxy Vol. 2” was inevitable, but not in the way you might think.

It was only a matter of time before a Marvel Studios movie bought into its own hype. Boy, does that 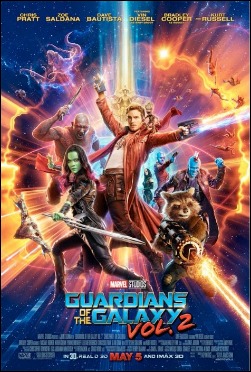 show in nearly every frame of this drab, disappointing sequel.

The original “Guardians” caught everyone by surprise. Witty, irreverent and just plain engaging, the film proved Marvel Studios’ product didn’t have to have all the rough edges sanded clean.

Just about everything joyous from the first time ’round has gone sour. Baby Groot, so charming in the trailers, is flat-out annoying. Drax, he of the broad shoulders and broader belly laughs, is one comic relief jokester too many. The Star-Lord/Gamora flirtation is paint-by-numbers obvious.

And that soundtrack! The first “Guardians” proved a marketing marvel, unearthing forgotten pop classics to help define Peter Quill (Chris Pratt) and his maverick ‘tude. Here, it’s shoved in your face from the opening sequence. And, track for track, it’s vastly inferior to the first film.

So what’s left? A self congratulatory air that benefits no one and a script that sounds like it was written by boys who love scribbling “nipple” and “pee-pee” on bathroom walls.

Once more our beloved Guardians are knee deep in trouble, thanks to an inexplicable theft by Rocket (Bradley Cooper, his semi-New York accent still a treat). They’re on the run from an effete species of golden humanoids.

They don’t get too far before encountering a mysterious spacecraft. The pilot? Peter’s long-lost father Ego (Kurt Russell). The reunion is strained at first, but Peter eventually shelves his suspicions.

Is that the right move?

The hokey screenplay has the answer! And, again and again, it telegraphs it (and other plot revelations) in such a ham-fisted way you’ll think they made a movie from a rushed first draft.

Writer/director James Gunn drizzles that limp story with the kind of self-aware dialogue you’d duck in a crowded coffee shop. Half the time Gunn gets the cast to guffaw at their own “funny” lines.

And why else would Peter bring up the ’80s sitcom “Cheers” if not to make audiences say, “ooooh, that Sam and Diane” flirting is just like Peter and Gamora! No one in Peter’s world knows that show. So when he starts blathering on about it it’s meant to lazily tweak our nostalgia circuits.

He overplays the retro soundtrack conceit until you fear he placed a cassette player under each theater seat. No scene can exist without a groovy oldie to keep it company, or a cast member to extol the virtues of a frothy pop nugget.

“Brandy” is both a fine girl AND cool song. It’s not the second coming of pop music, though. Chill out.

...a script that sounds like it was written by boys who love scribbling 'nipple' and 'pee-pee' on bathroom walls.Click To Tweet

And how dare they embed the great Sweet track “Fox on the Run” in the film’s trailer, sparking massive cyber record sales in the process, and leave it out here.

Guardians of the Galaxy Vol. 2 Movie Clip - Cut from the Inside (2017) | Movieclips Coming Soon

The opening sequence offers genuine promise all the same. It’s a throwaway set piece meant to re-establish the action, humor and banter that charmed us back in 2014.

It works. Nearly all of it.

The film quickly gets bogged down after that adrenaline burst. You won’t find one captivating action sequence in the whole film. The “Guardians” universe still looks gorgeous, but there’s little to actually grab your attention.

This is the first Marvel Studios film to talk down to its audience.

FAST FACT: One of director James Gunn’s earliest projects was penning the ultra-low budget film “Tromeo and Juliet.” He claims to have earned $150 for the gig.

Gunn is reduced to a series of pre-teen, ‘wouldn’t it be cool if the characters did this?’ compositions. Just don’t blame the cast. Dave Bautista once again proves a lively comic presence as Drax, even if his shtick grows stale by the third act. Pratt oozes charisma, proving his ascension to the A-list was no accident.

Zoe Saldana is given a stale plot about her love/hate bond with sister Nebula (Karen Gillan). Saldana shines through that green makeup.

Anatomy Of A Scene | ‘Guardians Of The Galaxy Vol. 2’ | The New York Times

And we won’t give anything away, but one character doesn’t live to see the end credits. Said character is given a sendoff worthy of Spock, Kirk, Luke and a half dozen other pop culture icons.

Ladies and gentlemen. This is the second movie in the franchise. We don’t know any character that well yet.

HiT or Miss: The summer begins with a thudding disappointment courtesy of “Guardians of the Galaxy Vol. 2.” Darn.