“Fantastic Beasts and Where to Find Them” forced this critic to do just that. The big-budget attempt to continue the “Harry Potter” franchise makes sense on paper. What studio wants to put that cash cow out to pasture?

The first in what we’re told is a five-film franchise may make plenty of cash. It’s still a withering experience for those who don’t genuflect at the “Potter” altar.

Fantastic Beasts and Where to Find Them - Comic-Con Trailer [HD]

Set decades before Harry Potter stepped foot in Hogwarts, “Fantastic Beasts” features a whole new cast of characters. Eddie Redmayne stars as Magizoologist Newt Scamander, who carries an unusual suitcase with him as the story begins.

He’s the future author of one of Harry Potter’s textbooks. For now, he’s visiting New York to protect some magical creatures and document it for future generations.

Some of Newt’s critters soon get loose, and he spends a good portion of the movie tracking them down. Only he’s stopped by Katherine Waterston, playing a wand registration bureaucrat who eventually rallies to Newt’s side. And the duo have plenty to fret.

A fascist wizard named Gellert Grindelwald is looming over Europe, and his brand of ugly rhetoric has metastasized in the U.S. Just check out Samantha Morton as a woman out to smite anyone with magical powers. The storyline suggest an “X-Men” like fable of differently abled folks on the run. That theme doesn’t gain much traction.

And poor Jon Voight. The legendary actor appears now and then as a local power broker yet is given virtually nothing to do. The previous “Potter” movies put great characters actors to fine use.

The film’s idea of fun is trotting out a gaggle of CGI creatures as if we haven’t spent the last two decades absorbing similar tricks. Yes, the Bowtruckle (a twig-like creation) is adorable. So is a slick black creature always up to mischief.

Let’s swap them out for a coherent storytelling and engaging characters … or even stars whose charisma can transcend this slop? 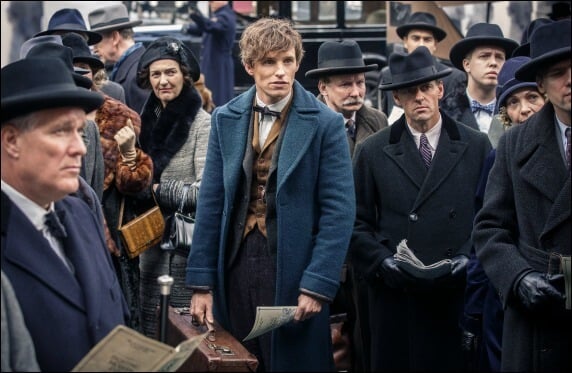 Redmayne may have an Oscar on his mantle, but he’s a bland, foppish hero. He’s still better than Waterston, who looks lost amidst the admittedly impressive set design.

And then there’s Percival Graves (Colin Farrell). He oversees security for the Magical Congress. He isn’t happy that Newt brought his suitcase full of creatures stateside. Four out of five Farrell roles fail to leverage his skill set. “Beasts” almost proves that fifth example. His character just doesn’t have the gravitas to make it happen.

FAST FACT: Author J.K. Rowling crafted her pen name as a nod to her grandmother. Born Joanne Rowling, she embraced her grandmother’s first name, Kathleen, as her second initial. The author doesn’t have a middle name.

It’s hard to imagine how punishing “Fantastic Beasts” would be without Dan Fogler. He’s much more than the Everyman dragged into Newt’s misadventures. His audience surrogate duties come second after his scene stealing.

He’s also an unlikely romantic interest. His attachment to a mind-reading magician (Alison Sudol) is the closest thing the movie has to a beating heart.

There’s magic aplenty in “Fantastic Beast’s’ final act, or course. That means more CGI overkill without a whiff of danger or consequences.

Then again, Rowling knows her audience will line up for anything she creates, though. And she’ll have those FX wizards to distract us from everything that’s wrong with the film.

HiT or Miss: “Potter” fans will find something to enjoy in “Fantastic Beasts and Where to Find Them.” Everyone else will be in for a long slog.