So what? It’s endlessly charming, much like the real Eddie himself. It’s inspired by a story too wacky not to be true. And, when the filmmakers kept stacking the odds against our hero to the comical breaking point, this critic didn’t mind.

Just Google the real Eddie the Eagle after watching the film version. There’s even more colorful moments the feature couldn’t squeeze in.

Young, bespectacled Eddie (“Kingsman” star Taron Egerton) is no one’s idea of a hero. He’s a bit lumpy and not exactly a smooth talker. What he wants more than anything is to compete in the Olympics. Who wouldn’t? He just won’t stop until it happens. He simply needs to find the right sport … with a very low barrier to entry.

Turns out the ski jump offers some perks for less accomplished types. Just hurl yourself at ridiculously unsafe speeds down a big ramp. It helps that Eddie swallows fear like he does his favorite beverage, milk – in big, thirsty gulps.

RELATED: How ‘Finest Hours’ Honors America at Its Best

He’ll still need a little help. So when he bumps into a former ski jump prodigy turned genial drunk (Hugh Jackman), it’s a mismatch made in movie heaven. 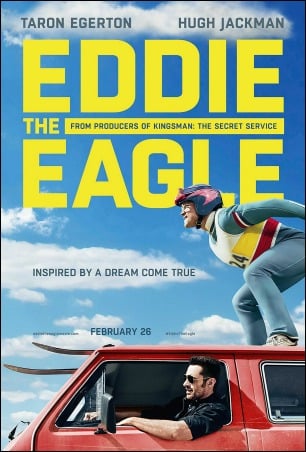 “Eddie the Eagle” won’t get its hands dirty on the coach’s alcohol problem. He’s a movie drunk, not the real deal. And we see little of any dark side Eddie might have displayed during those momentous ski runs.

It’s chipper and heartwarming all the same, a rigorously constructed tale sure to inspire.

Hard to believe the handsome young bloke from the “Kingsmen” movie is the awkward Eddie. Egerton transforms his appearance with nothing more than those thick glasses, but the impact is considerable.

He’s like Clarence from Cartoon Network, a character you can’t help but admire despite his goofy persona.

Director Dexter Fletcher, a former child star transitioning nicely to the big screen, puts us right in Eddie’s vantage point. The jump sequences are exhilarating, capturing the ferocity and grace of the sport. Don’t try this at home.

Fletcher hits the expected story beats but inserts one reaction shot for the ages. Every time “Eagle” appears to go stale it turns a cliche on its ear.

Formula will only power a picture so far. Fletcher and co. nail a few sly moments that put you forever on Team Eddie. When a ski jump competitor nabs a very high score, Eddie beams with shared joy. That’s the essence of a worthy soul.

“You’ll never be Olympic material,” Eddie is told at one point. “It’s a world that doesn’t want you in it.” We’ve all been there, even if we never even dreamed of climbing the stairs of a massive ski jump.

Watching Eddie ignore that advice is just the right kind of movie medicine.

DID YOU KNOW: The real Eddie “The Eagle” Edwards learned he had made the Olympic team while staying at a Finnish mental hospital.