Need proof? The filmmakers play the “Hitler Card” to shame anyone who thinks the Tea Party might be a positive political movement.

And that’s a shame, since for every heavy-handed attack against Constitution advocates there’s another, more whimsical, take on race in 2016.

“Planet Negro!” opens in 1939, a time when black Americans were treated like second-class citizens -at best. Frustrated by the lack of social progress, three black people board a spaceship (designed by George Washington Carver) headed for Mars.

Their mission? Find a new home for black people, one where they can be treated equally.

The launch goes as expected, but Mars ends up being just like the planet they left. Only it appears that black and white Americans now live equally, the shackles of past discrimination having been long since discarded. 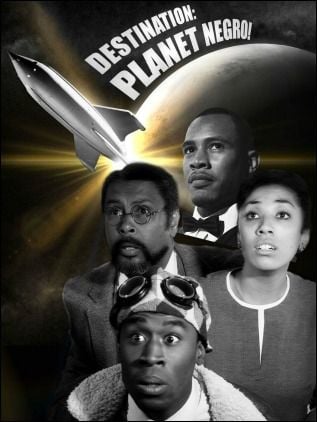 Writer/director Kevin Willmott of “CSA: The Confederate States of America” fame, devises an ingenious way to view modern-day America. It’s the classic fish out of water template, and at times the execution is masterful.

Watch our heroes stare at a hip black man whose pants are drooping well below his waistline.

“He didn’t even have the strength to pull up his pants!” they cry, thinking the man is an overworked slave.

They also suspect the planet’s water is poisonous, since everyone seems to drink out of slim plastic bottles.

Slowly, surely, they learn about this new planet. They also meet a black politician who wants to take back America, build a wall … you know the drill. He’s part of the Patriot Party, and they are the film’s true villains.

And an Uncle Tom shall lead them.

The story’s far-left talking points bubble up mid-movie. By the end, we’re left with a series of speeches aimed directly at the Daily Kos crowd.

“Planet Negro!” works the production’s microscopic budget to its advantage. Those B-movies from the 1950s didn’t break the bank, either. So “Negro’s” crude FX and threadbare sets are all on point. As is the bombastic score, swiped neatly from that era’s oh, so serious genre films.

The performances range from awkward to comic gold.

Tosin Morohunfola, playing Capt. Race Johnson, mugs a bit too eagerly at times but pulls off some inspired comic moments. His best sequence? Learning to “walk black,” a process taught to him by a white rapper.

Willmott, who plays the wise professor who boards that clunky rocket ship, isn’t afraid of mocking his own race. He’s far more savage to his political enemies, who he apparently sees as the root of modern discrimination.

Willmott is on more solid ground when he’s being precocious, like naming a Robby the Robot-ripoff as Strom. The screenplay also shows how so-called “shucking and jiving” helped some blacks survive in racist times. The moments are funny yet difficult to watch.

One character, after getting thrown in jail for disagreeing with a police officer, looks around at all the fellow black men in the jail cell.

“I thought you said Jim Crow was over,” he asks a friend. 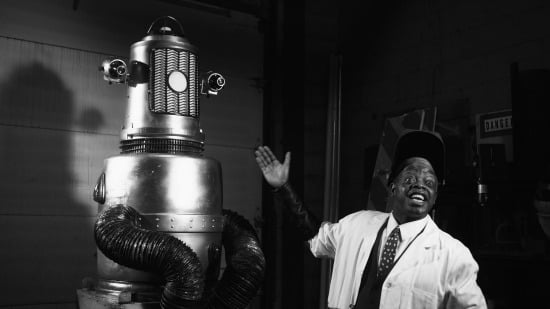 Other dialogue snippets prove equally saucy. The film begins in old-school black and white, but when the rocket ship touches down, these accidental astronauts discover a Technicolor world.

“It’s colored! Gotta be a good sign,” they say, puncturing the fourth wall to fine effect.

All that stinging satire gets flushed by a hatred for conservatives.

The film’s IMDB.com page cites 2013 as its year of creation, one reason the Tea Party elements pop off the screen.

“Destination: Planet Negro!” begins in the past and reflects an ideology that should be buried with time. Those who don’t adhere to a specific, progressive viewpoint aren’t the monsters of history. Their views are valid and deserve a fair hearing.

This intermittently sharp satire hates the very thought of that.